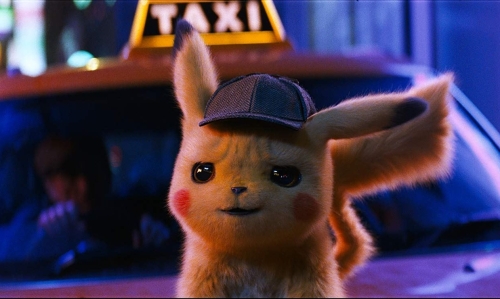 In this adaptation to the worldwide Nintendo phenomenon, Pokemon Detective Pikachu follows Tim Goodman (Justice Smith), a former Pokemon trainer who renounced the trainer’s life after his mother died when he was a boy. Now pursuing a mostly uneventful career as an insurance agent, Tim is reluctantly pulled back into the world of Pokemon when he gets a fateful phone call: his father, a police detective named Harry, died in a car crash while working an investigation.

When Tim ventures back into his late father’s office to collect his things, he makes two shocking discoveries: his father’s partner Pikachu (Ryan Reynolds), and that he can understand him. After getting over the fact that he can understand a Pokemon, Pikachu informs Tim that he believes Harry is still alive and that he’s trying to track him down. Reinvigorated with a newfound sense of hope for his father’s survival, Tim teams up with Pikachu to solve this mystery, because he’s not just any Pikachu – he’s a detective Pikachu.

One of the first elements you notice about Detective Pikachu are its visual effects. I know, I know, good visual effects are a common compliment in today’s CGI-driven industry. Still, Detective Pikachu dazzles, not just because of its exquisite computer graphics and fast-paced action sequences, but also in the overall design and rendering of its Pokemon.

In one of the film’s earliest scenes, Tim ventures out into a grass field to catch a Cubone, which is basically a tiny dinosaur with a skull on its head. In just the first few frames, I was mesmerized at how real the Cubone felt; how it moved, behaved, and reacted with hostility like a wild animal really would as opposed to the cartoonish expressions you’ve become accustomed to from the Japanese anime. As the movie went on, I was further entranced as Tim entered Ryme City and was exposed to this vibrant, colorful world filled with Pokemon and trainers alike. The fire-breathing Charmanders and water-pumping Squirtles waddled down the streets like miniature Godzillas, while the ghastly obese Snorlax dozed off at the intersections like an oversized blue Garfield. Watching these creatures fill the screen all at once was like playing “Where’s Waldo?” with Pokemon, and it was a complete joy to watch as you eagerly waited to see which Pokemon would pop up on the screen next.

Of course no Pokemon shines brighter in the film than Pikachu himself. That’s to be expected, given the fact that he’s been the series’ flagship character ever since his debut in the first batch of games back in 1996. What I’m surprised by is how brilliantly Ryan Reynolds’ offbeat personality matches with the electric little fuzzball. Reynolds has made a name for himself as the merc with a mouth in the R-rated superhero movie Deadpool and its sequel Deadpool 2. How on Earth was this notoriously sarcastic scoundrel supposed to play one of Nintendo’s most cute and cuddly icons? By not being cute and cuddly at all, that’s how. Detective Pikachu isn’t the same as the other renditions of the Pokemon where he simply utters “Pika pika” all the time and zaps people. This private-eye, caffeine-addicted Pikachu has a personality to him, one that has no qualms with conniving detective schemes and swearing in PG limitations. Reynolds’ Pikachu reminded me of… well, me honestly. Perhaps that’s why I identified with him so much.

The rest of the film’s appeal is relatively straightforward. The plot, while mostly unspectacular, has a few hard-hitting comical and emotional beats to it that keeps the film moving and interesting. The performances by the human actors are reliably serviceable, if not as impressive as Reynolds’ natural charm. And the music by Henry Jackman is especially notable, with its beats and tunes throwing back to the classic battle themes that buzzed on your Game Boy whenever you entered into a Pokemon battle.

What ultimately sets this movie apart from other failed video game adaptations is the child-like love and affection it has for its franchise. So many video game movies fail to capture the same magic that their arcade counterparts initially possessed because movie studios are always more focused on the plot beats and not the emotional aesthetics behind them. Pokemon Detective Pikachu is a different story. It not only enjoys its simplicity: it thrives on it. It has fun with it as it delivers an exciting, funny, even heartfelt adventure that does the Pokemon legacy justice. Pokemon Detective Pikachu has got the live-action treatment down. Now if only Sonic the Hedgehog could be given the same thing.