May The LGBT With You 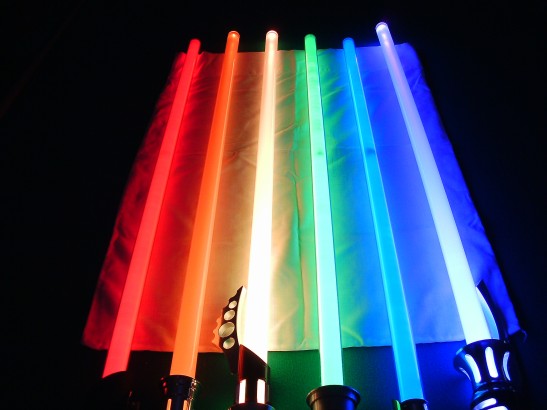 After the horrible shooting at a gay nightclub in Orlando, Florida, a petition was recently created to put more gay characters on film in honor of those whose lives were lost. More specifically, they’re petitioning that gay characters be introduced in the upcoming sequel to the 2016 science-fiction epic Star Wars: The Force Awakens.

This idea might seem too radical or progressive for most of conservative America, especially when you look at the overwhelming majority of heterosexual protagonists in today’s films. Yet, I think now is the right time to introduce gay characters into mainstream film culture, and Star Wars is the perfect franchise to do it in.

According to a 2015 Gallup survey, 63 percent of Americans think homosexuality is morally acceptable. 60 percent are also in favor of same-sex marriage. Both numbers are a massive increase from the respective 38 and 35 percent numbers in the 2002 survey.

In other words, not only is homosexuality growing in America: its support is growing just as fast.

This provides an opportunity for Hollywood, an opportunity that means much more than just cultural impact. Earlier this year, Star Wars: The Force Awakens grossed over two billion dollars, a rare achievement that it shares with Titanic and Avatar. That’s significant for more than just the number. Out of all of the films that grossed over a billion dollars, Star Wars: The Force Awakens is one of the few to have a female protagonist, and one of the even fewer to have a black protagonist. Finally, the Hollywood myth of the tall, muscular white protagonist selling more tickets is debunked through a female jedi and an African-American stormtrooper taking on the galaxy.

We’re moving in to a day and age where diversity is not only supported- it sells. For Hollywood to stop the train now while at the peak of its popularity is only selling itself short.

Why do I care about all this? I’m not an active supporter of gay rights, nor am I socially inclined towards the LGBTQA agenda. What stake do I have in the sexual orientation of our favorite movie characters?

Simply put, I want something different. For years, I’ve had to stomach the same images of a white, heterosexual actor running from explosions, driving cool sports cars, shooting firearms, kung-fu fighting bad guys and making out with hot supermodels. I’m sick of the pretentiousness. I’m sick of the same moldy, tired, regurgitated images, and I’m sick of seeing the same Tom Cruises, Mark Wahlbergs, Ben Afflecks, Bruce Willises, Matt Damons and Liam Neesons doing the same crap over and over again. 2015 was a diversity revelation not just with Star Wars: The Force Awakens, but also with Mad Max: Fury Road, Straight Outta Compton, The Hunger Games and many others.

While I’m personally not a supporter of gay rights, I am a supporter of human rights. That means representing the human race in its entirety, with all of its diversity and uniqueness intact.

I love movies. I love Star Wars. But more important than either of these, I love period. So does the homosexual community. We love all of these things, regardless of our sexual orientation. Why can’t we share our love of these things together?