There is a moment in Venom where the titular multi-tentacled anti-hero is threatening a burglar inside a convenience store. He tells him he’s going to eat both of his arms, both of his legs, and then eat his face right off of his head. “You will be this armless, legless, faceless thing, won’t you?” he narrates to the petrified thief. “Rolling down the street: like a turd in the wind.”

Why am I opening my review talking about turds? Because as awkward and misplaced as that line sounds, it is perhaps the most accurate description of this entire movie. Venom is violent, creepy, edgy, seethingly disturbing, and just when it begins to build up into something interesting… it takes a wrong turn and nosedives into the pavement. It’s already been demonstrated countless times before, but if you need further proof as to why great comic book supervillains make for terrible superhero movies, look no further than Venom.

Based on the Marvel comic supervillain of the same name, Venom follows Eddie Brock (Tom Hardy), an investigative journalist who has a nasty habit of following people who do not want to be followed. After accusing a high-profile tech CEO of purposefully murdering test subjects at an alarming rate, Brock loses his job and is abandoned by his fiancee Ann Weying (Michelle Williams). Now without a job, a career, and a love life, Brock just sits alone in his apartment, drowning himself in pity and alcohol.

One day, Brock unknowingly comes into contact with a gooey substance that reveals itself as a life form: a symbiote that physically and mentally bonds itself with Eddie. Granting Eddie super-strength, speed, agility, and a menacingly toothy grin, the symbiote creates a new life form that is neither Eddie Brock or the symbiote. Together, they are reborn as the man-eating monster known as Venom.

You might remember that this is not Venom’s first live-action outing for the big screen. You might be better off forgetting it. His first attempt at the spotlight was in 2007’s Spider-Man 3, where he was played by “That 70’s Show” actor Topher Grace. He was rightfully and relentlessly mocked for his insipid, whiny, pathetic portrayal of an otherwise terrifying character. If I come out of the theater and I am annoyed by Eric Forman instead of shaken by Eddie Brock, you know there’s a serious problem here.

The best thing I can say about this new Venom movie is that it does an excellent job rebooting the character, washing your memory of his God-awful debut a decade earlier and updating him with a sicker, more menacing design. A large part of that is in thanks to Tom Hardy, who switches between playing the two different characters here in mesmerizing contrast. When he portrays Eddie Brock, he molds him as a sort of vulnerable, pitiful character: a failing journalist who is drunk for half of the day and down on his luck for the other half. But besides playing the exasperated and horrified Eddie Brock, Hardy also voices the Venom symbiote possessing his body, and the way he expresses Venom’s menacing, snake-like delivery is just downright chilling to listen to.

This in combination with the efforts from the visual effects team makes for an ominous, visceral presence in this 10-foot CGI creature. One of the best things about this movie is when the Venom symbiote breaks out into his full form, taking complete control over Brock’s body and just starts running over any enemy in his path. When the movie breaks out into full-blown creature-feature action, that’s when the film is at its best, with Venom’s tentacles flailing about, making giant spider-like leaps, and chomping off bad guy’s heads like they’re the stem of a Tootsie pop. Many fans were reasonably concerned what Venom was going to look like in this movie with his last big-screen appearance still in our memory. I want this on the record: Venom looks and feels vicious, and he rightfully earns the title of lethal protector.

So the Eddie Brock and Venom characters are fleshed out very well in this movie. What isn’t done as well? Essentially everything else.

For one thing, Michelle Williams does nothing for this movie. Her character could literally have been portrayed by Megan Fox, and she would carry the same emotional relevance throughout the movie. That goes double for Riz Ahmed, who plays the movie’s villain named Riot. His character is essentially a gray-scaled clone of Venom, which doesn’t do any favors for the movie’s final battle where black and gray goo basically just splashes against each other over and over again.

The real problem here lies in how the characters are written. They aren’t organic. They don’t feel like they belong here. And unlike Eddie Brock and his venomous alter-ego, their roles don’t have any real impact on the story as a whole. Ann Weying is here because every superhero apparently needs a love interest, and this story wouldn’t be complete without some complicated romantic feelings involved. Riot feels especially shortchanged. Instead of being the relentless, unhinged force he’s supposed to be, he just feels flat and artificial: like a final boss in a video game instead of a mortal enemy for our hero. That lack of effort into fleshing out these characterizations makes for dull, uninspired portrayals, which is especially unfair given the talent and caliber of these two actors. If you don’t believe me, look at Williams’ work in My Week With Marilyn and Ahmed’s work in Nightcrawler. Then look at their performances here and tell me they were given ample material to work with.

All in all, Venom is not the worst movie in the world, but it isn’t really a good one either. It’s just sort of there flailing in the whirlwind of superhero mania that hops from one franchise to another. I am curious as to how the series will progress from here, as Sony has relentlessly teased that they wanted to launch their own cinematic universe from this movie. I at least have more hope for the Venom cinematic universe than I do for, say, the DC Extended Universe. But on its own two tentacles, Venom is ugly, messy, and something I’d much rather forget about: like a turd in the wind. 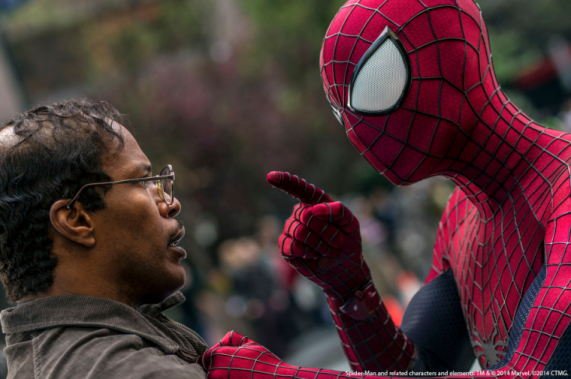 The Amazing Spider-Man 2 is the standard of a superhero movie that everyone should aspire to. It’s exciting, action-packed, gut-bustlingly hilarious and emotionally involving to a point where I was surprised at how personal and genuine it really was. “Amazing,” in fact, is not a good enough word to describe this movie — “Superior” is more like it.

Taking place after Curt Connors, aka The Lizard, attacked New York City, The Amazing Spider-Man 2 shows Peter Parker (Andrew Garfield) as he continues to adapt to his new life as the spectacular Spider-Man. He’s just about to graduate, he’s getting a job as a freelance photographer at the Daily Bugle and his relationship with Gwen Stacy (Emma Stone) is going strong. Being Spider-Man has its perks and its downfalls, and this is a rare high point in Peter’s life.

Elsewhere, however, dark forces develop under Oscorp. Engineer Max Dillon (Jamie Foxx) gets electrocuted by bio-electric eels, transforming him into the chaotic villain known as Electro. Russian mobster Aleksei Sytsevich (Paul Giamatti) gets equipped with a fully armed mechanical suit, becoming the Rhino. And Harry Osborn (Dane DeHaan), an old friend of Peter’s, returns with a dark secret that he’s hiding from everyone.

That makes three villains in total for this sequel. Concerned? You should be. The last time we had three villains in a Spider-Man movie, that film was Spider-Man 3. I’m never going to get that image of Tobey Maguire doing the Elvis Presley-stride out of my head, ever. Does anyone have any hydrochloric acid I can pour into my eyes?

Well, you can rest easy, fellow web heads. The Amazing Spider-Man 2 is not Spider-Man 3. Quite the contrary, actually. This is a significantly better Spider-Man than its predecessor, a film that bounces in between multiple tones and genres all at once and does all of them brilliantly.

An early fight scene in the film, for instance, is as wacky and funny as a Looney Tunes cartoon, with Spidey struggling to grab all these plutonium canisters off of a moving truck like he’s in the middle of a pinball table. In another scene, he’s in the middle of an action sequence so exhilarating and mind-blowing that it could have come straight from a video game cut scene. In another moment, him and Gwen are dealing with a real emotional struggle neither quite know how to handle, something that has haunted Peter since the first movie.

That’s what makes this Spider-Man better from the other one: It has many tones, story lines, characters and emotions that it’s juggling all at once. That’s a weighty order, and not one to handle easily. Yet director Marc Webb handles the challenge excellently, delivering just as relevant a character drama as he does an exciting action movie.

The cast members have expert chemistry with each other, but that should be expected because of their exceptional performances in the first film. We already expect Garfield and Stone to be perfect with each other because they were nearly inseparable in the first round of the series. It’s more efficient, then, to focus on the newer cast members: Jamie Foxx and Dane DeHaan.

Foxx is electric as the high-voltage villain, pun intended. At first he’s just a socially silly and awkward scientist, similar to Jim Carrey’s version of the Riddler in Batman Forever. When he goes through his transformation into Electro, however, everything changes. He becomes an angry and malicious supervillain, a man who is mad and frustrated at everything and just wants to kill everyone, then jump start their heart just so he can kill them again. DeHaan, especially, was desperate and conniving as Harry Osborn, a menacing and starkly different Harry than the James Franco version we are used to in the original trilogy.

Both of these villains serve a pivotal role to Peter’s development. Electro is the physical conflict Peter has to face in the movie; Harry is the emotional one.

There’s another concern comic book fans will have about this movie, and that is the same concern they have with Captain America: The Winter Soldier: We’ve already read the comics. We already know the twists that are coming up, and as a result, our reaction is dulled when that moment comes in the movie.

Let me make a reassuring statement for my fellow comic book lovers: I could see the twist in this movie come from a mile away. Yet when I saw it, I reacted as if I was witnessing Peter’s tragic story for the first time.

There are apparent concerns to have with this movie. The multiple story strands are worrisome, the overload of villains can be an issue and Max Dillion’s character is far too silly to fully accept as being realistic.

Does that change The Amazing Spider-Man 2’s influence, or for that matter, its effect on the audience? The answer is no, it does not. The Amazing Spider-Man 2 is still a great sequel, an excellent expansion to the Spider-Man universe and a more-than-welcome development to Peter’s never-ending growth as Spider-Man. I’m tempted to compare it to the legendary Spider-Man 2, although I’m not sure if it’s quite there yet. One thing is for sure, however: it’s head-over-heels over Spider-Man 3. If Webb keeps this up, he just might surpass Sam Raimi’s original trilogy.