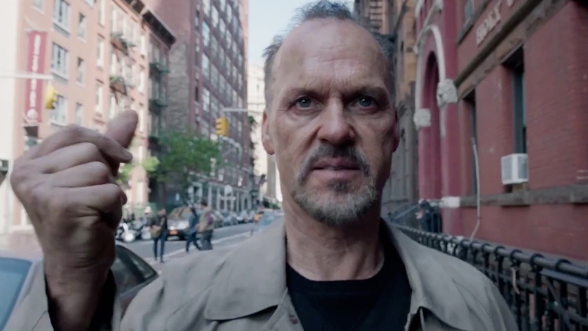 The artist’s struggle, all in one take.

Birdman, or otherwise known as The Unexpected Virtue of Ignorance is one of the most mesmerizing films I’ve ever seen. It is also one of the most unique, disturbing, shocking, and confusing films I’ve ever seen too. That’s okay. This film was reaching for a specific vision, and director Alejandro Inarritu has expanded beyond it. I admit I don’t know what to expect as far as the public reacting to this, and I also don’t know how accessible it is to non-film aficionados either. But I have seen the movie frame by frame, and I think it’s one of the best films of its kind. On the surface value, it’s about the struggles of Broadway theatre. In deeper insight, it’s about ego and the obsessive human condition.

The film stars Michael Keaton as washed-up actor Riggan Thompson, who has been forgotten by his adoring public after portraying the lead role in a series of superhero films titled Birdman. This is ironic, because in real life, Keaton portrayed a superhero in Tim Burton’s 1989 film Batman. Desperate for a comeback, Thompson sets out to write, direct and star in his favorite Broadway play: What We Talk About When We Talk About Love by Raymond Carver.

Things immediately hit the fan during the week of their first preview. One of Riggan’s actors gets a head injury from a loose light on the set. His replacement, Mike Shiner (Edward Norton) is a talented but brash and arrogant actor who sees himself as Riggan’s superior. And, as he faces personal problems with his estranged daughter Sam (Emma Stone), Riggan begins to feel the closing pressures of Broadway when a malicious theatre critic tells him she’s going to “kill his play.” Now Riggan is trying to keep the play and his sanity afloat, and he will make whatever sacrifices he needs to make sure both happens.

Written, directed and produced by Inarritu, Birdman is the first black comedy made by the filmmaker, his most successful films to date being Oscar nominees Babel and Biutiful. Now he has made Birdman, and I am tempted to say it’s the best film he’s made yet.

What worked so well with the film? The first thing is the editing and the cinematography, which was shot so wonderfully by Oscar winner Emmanuel Lubezki that it places you in the moment, in the reality of the film, not making you watch it from a cushion seat on the eighth row of a dark movie theater. Lubezki, who worked with Inarritu on short films in the past, decided to shoot the film and edit it into a continuous fashion, giving off the illusion that the entire film was filmed in one take. Even though the movie wasn’t filmed in one shot, the feeling it gives off makes it feel alive and moving, not unlike the world of theatre that Riggan is trying to prove himself in.

I wonder how much effort this takes, not just from the cinematographer and director’s point of view, but from everyone else involved in the film as well. How many hours did the actors need to rehearse their lines in order to get their roles right? How much pressure was the tech and lighting crew under while they were filming, knowing that if they screwed up, everyone would have to start back to square one? How many hours did film editors Douglas Crise and Stephen Mirrione have to sit in front of a computer, making sure the shots transitioned so well that you couldn’t even see the transitions? The illusion not only worked because of the idea that Lubezki and Inarritu offered, but because of the commitment it received from everyone involved with the film. In many ways, their efforts were all worth it: the camerawork here expresses more of the story than the character’s dialogue does.

The parallels in this movie are also ingenious. How does Keaton feel playing as Riggan Thompson in the movie, knowing that he reached international fame as Batman earlier in his career and having since then never been able to match a more recognized role? How does Inarritu feel, going through all of the production pressures Riggan did in making the play as he himself did in making the movie? Did he intend this movie as self-reflection? Is he telling the audience what he goes through daily as a filmmaker? Or is he using his struggles as a platform to tell a much deeper, more important story to the audience?

For me, I don’t get as much joy out of interpreting as much as I do out of experiencing. And make no mistake: Birdman is an experience, surreal, tantalizing, and thought-provoking all at once. I’m still sitting here, hours later, not quite fully realizing what exactly Inarritu was trying to portray in this film. Is he commenting on the artist’s struggle? Commercial vs. independent film? Fatherhood? Friendship? Family? Lost love?

I think it’s all of the above. Or maybe none of the above. I honestly don’t know. In the movie, Inarritu battles labels that are placed on artists and on the art that they produce. Is Riggan Thompson a superhero, or an actor portraying a superhero? Is he a former shell of who he is, or a flower that has yet to bloom? We see in this film how these labels influence his life and how much stress and anxiety it presses upon him. To put labels on the movie would contradict Inarritu’s intentions. It would be offensive to the film.

My bottom line: Birdman is a masterpiece. It is so distinct in its own language and style that I think it is impossible to define it, let alone replace it. Critics will applaud it for it’s technical and emotional achievements. It will definitely garner some Oscar nominations. It’s a sure contender for visual effects, cinematography and editing. It is also sure to confuse certain people, to which I would recommend stop trying to understand it. Birdman is not meant to be understood. It is meant to be experienced, and if you can help it, interpreted.

Post-script: A thought I had after seeing the movie that I think viewers will also have. Because of how profoundly his role as Birdman affected Riggan, is Inarritu attacking the superhero genre of film? I believe he is, but I choose not to acknowledge that. After all, for every time a superhero film was called too simple, couldn’t you call any art film too complicated? I quote Mark Twain: “Too much of anything is bad.”