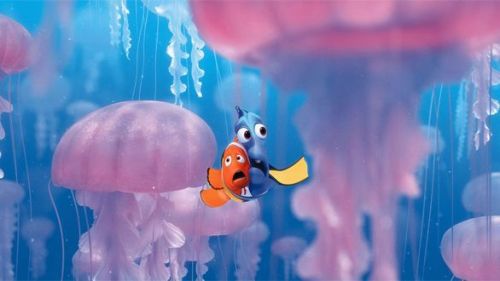 Fish are friends, not food.

Reviewing a film like Finding Nemo is an impossible task, because it isn’t meant to be reviewed. It’s meant to be experienced. Like Pixar’s other masterpieces, Finding Nemo finds joy and adventure in seemingly ordinary environments. Toy Story found theirs in a toy box, and A Bug’s Life found theirs in an anthill. Now Finding Nemo plunges into the ocean to tell us a story about family, fatherhood, and friendship. The resulting film is nothing short of Pixar’s best: iconic, entertaining, and meaningful.

After viewing what is perhaps the most heartbreaking opening I’ve ever seen in an animated movie, we are introduced to the film’s key characters. Marlin (Albert Brooks), a deep-sea clownfish, is the single father of Nemo (Alexander Gould), his son who suffers from a short, defective fin. He’s very protective of his son: so much so, that he will hide him away in his anemone, away from the rest of the ocean.

One day, Marlon goes through any parent’s worst nightmare: he sees his son kidnapped by human divers swimming out in the ocean. Now accompanied only by a short-minded regal tang named Dory (Ellen DeGeneres), they set off across the ocean to save Marlin’s son.

The first thing you notice in any Pixar movie is its animation. Vibrant, elegant, and beaming with life, the one thing you can always appreciate about their films is the vivid details of their animation. With Finding Nemo, however, I’d argue that it is the most refined out of Pixar’s other films. This is the fifth film Pixar has produced now, and the fifth time that they’ve captured me with their ambient motions, intricate details, and complex characters. The colors are bright and saturated, reaching out to you in all of its eye-catching graphics and details. The fish feel fresh and alive, briskly swimming through the ocean as if they were real animals. The ocean itself breathes with just as much life as the fish do. Its plants flow in synchronization with the ocean streams, its currents moving like breaths in the ocean. This is easily Pixar’s most visually pleasing film yet, not just because of the colors and motions, but because of how real entire environments feel. This isn’t just an animated ocean: it is the ocean. That’s how authentic it feels and moves.

But the animation isn’t the only beautiful thing about Finding Nemo. Its story is equally breathtaking; simple and straightforward, yet creative and complex. On the surface, we have this father-son dynamic going on in between Marlin and Nemo, which serves as the emotional focal point of the film. In deeper insight, this is a movie about environment conservation and the effect our race is having on fish life.

Take Nemo’s plight as the most pure example of this. After being kidnapped, Nemo is dropped into a dentist’s fish tank with a collection of other fish, all of whom are terrified of the dentist’s reckless niece. It is in this tank where you see very simply that fish are not viewed as living creatures to these humans, but rather as objects, property, gifts. Seeing how poorly the fish are treated in this movie reflects a very sad truth under its layers of fun and humor, and it makes me ponder on how much of a threat we truly pose on the environments of the real clownfish, regal tangs, sharks, sea turtles, and the rest of the fish in the ocean.

None of this takes away from the fact that this is at heart a kids movie: a fun, colorful, and unique one at that. Yet this is a rare picture even among children’s films, an animated movie parents can enjoy just as much as their kids do. Perhaps that is because the main character is a parent himself, and it is easy to relate to his joy, his fears, and his solace as a father, and as someone who cares for something much bigger than himself. Animated films nowadays are like the ocean: vast, wide, never-ending, and impossible to predict. Finding Nemo is the pearl you find in it: small, hard to find, yet immensely valuable, just like its small-finned star.