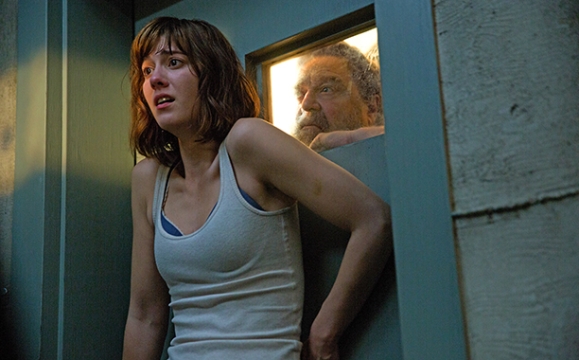 Whether you love him or hate him, you gotta admit one thing about J.J. Abrams: he knows how to sell a film.

Take 10 Cloverfield Lane as a testament to his skill. When the trailer dropped out of nowhere back in January, nobody knew anything about the plot, characters, or premise of this movie. That’s rare in today’s industry, especially with all of the casting and production announcements circulating daily on today’s news platforms. The fact that 10 Cloverfield Lane’s producers, director, writers, and actors were able to keep it a secret up until now is genuinely surprising, and I think it will pay off for them. It’s built up anticipation for the movie in ways no major blockbuster can do, and it will equally fulfill it’s audience in ways only this movie can supply.

In their excitement, some fans speculated that this movie is a sequel to Cloverfield, a risky yet innovative 2008 monster thriller also produced by Abrams. You would be wrong. 10 Cloverfield Lane is about as related to Cloverfield as Star Wars is related to Star Trek. Same genre, different execution. Much different.

This time around, 10 Cloverfield Lane ditches the nauseating shaky cam from Cloverfield and chooses instead to focus on a few survivors in a bomb shelter as opposed to a collapsing New York City. These survivors consist of Michelle (Mary Elizabeth Winstead), Emmett (John Gallagher Jr.), and Howard (John Goodman), the last of whom built the shelter in the first place. These three are forced into the shelter after a chemical attack cripples the U.S..

Or so Michelle is told.

Before coming to the shelter, Michelle got into a devastating car crash that left her injured and unconscious. She wakes up chained to a small bed on the floor next to Howard, who doesn’t quite seem all there if you know what I mean. Michelle is left with a difficult decision. Does she choose to trust her instincts, or this man that’s telling her that the world has ended?

The special thing about 10 Cloverfield Lane is that it focuses on its setting and performances to provide suspense instead of an overflow of visual effects. This is not an aesthetic Abrams is unfamiliar with. Ever since producing Cloverfield, he’s mostly understood that it is not spectacle that provides thrills, but rather, perspective. And whether it’s through the eyes of a producer, or through the lense of directing Mission Impossible III or Super 8, he’s always been a filmmaker that’s understood the value of perspective.

Take, for instance, Michelle’s perspective in the movie. Through her eyes, she’s just a prisoner who woke up in someone’s basement chained up to a mattress on the floor. The man who says he saved her life isn’t entirely a friendly guy. He’s old, unsettling, awkward, unreasonable, and demanding, running his bomb shelter like a warden runs a prison. Michelle is understandably terrified with him, but then she’s told that there’s been an attack on the world outside. Now what do you do? Do you try to escape and possibly face death, or do you believe this stranger and confide in the safety of his shelter?

Such psychological dilemmas is what compels the film forward, and director Dan Trachtenberg handles this cast skillfully in the small space that they are confined in. Winstead and Goodman bounce off of each other perfectly in the film, like a cat and mouse locked together in the same cage. Winstead, who’s played the survivors role in quite a few films (Live Free Or Die Hard, The Thing prequel), displays her trauma and distress here effectively without overacting or reaching for an emotion. Goodman is just downright chilling. He’s a man who seems like he has good intentions, but has a dark side to him that he demonstrates with disturbing normalcy. Their dynamic together felt eerily resemblant of Clarice Starling and Hannibal Lecter from 1991’s The Silence of the Lambs, which also featured a chilling relationship formed more out of necessity rather than comfort.

All of this builds to a well-paced, tense, and uncomfortable film driven almost entirely through performance, which is a very special thing in today’s industry. My biggest regret is that given the talent and the uniqueness involved with this production, it has to undercut its own success by throwing a CGI action spectacle in the third act of the film. While I won’t spoil it by saying what exactly happens, I will say it’s a severe shift in genre by the time the third act rolls around. We go from a tensely-wrought suspense-thriller to what is typically considered a Hollywood blockbuster. In making that transition, the film loses a part of its spirit and what makes it special from other thriller films.

“But it’s science-fiction,” you might argue with me. Yes, but did it need to be? Damien Chazelle made an incredible, heart-racing thriller in 2014’s Whiplash, and that was a film about the sharp rivalry of two passion-fueled musicians. Chazelle also worked on the script for 10 Cloverfield Lane, and I’m convinced that Howard’s uneasy presence originated from Chazelle’s ideas. The studio should have followed in his lead. The creepiest scenes in this movie remains to be from the tension between the characters and for what they can or can’t do to each other: not some supernatural force that threatens these people from outside the shelter. A quick rewrite of the ending and a few reshoots could have shifted this picture from a good movie to a great one.

All in all, 10 Cloverfield Lane is an effectively creepy film that you just wish would follow through on its intentions. The movie draws a line between fearing what is reality and what is fiction, and at looking at that line, isn’t it reality that seems more scary to us? That’s the thought that stuck with me when I left the theater. Well, bomb shelter.