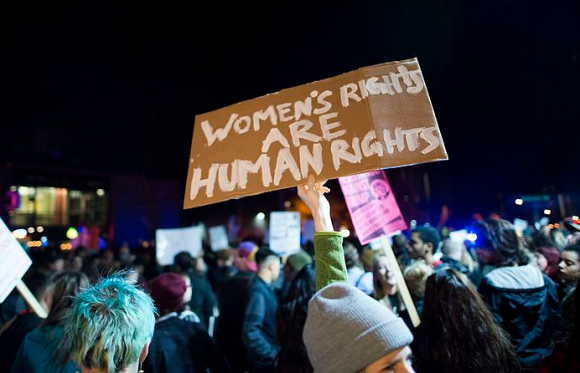 And hero, husband, and father.

Chris Kyle was an American sniper. Serving four tours in Iraq, with 160 confirmed kills and approximately 95 more unconfirmed, Kyle earned the title of being called the most lethal sniper in American history. More than being a soldier, though, he’s a father, a husband, and a friend. He was killed in 2013 at age 38. He was shot by a soldier suffering from PTSD that he was trying to help.

We know all these details going into Clint Eastwood’s American Sniper. We already know how it ends, we just don’t know everything leading up to it. Eastwood understands this, and uses it to his advantage as his film not only gives an honorable tribute to one of America’s most committed soldiers, but also foreshadows to a sad fate that we already know is coming. Gee, thanks a lot Clint. I didn’t even bring my tissues.

The film opens on the same startling scene that the book does: with Kyle looking down the scope of his sniper rifle at an Iraqi mother and her child, both of whom were aiming to suicide bomb a battalion of soldiers on the street. Eastwood sets up the tension of the scene perfectly here, with Kyle’s sweaty, darting eyes surveying the scene and desperately trying to see any way out of the tormenting choice he has to make. He soon dreadfully realizes there is no way out: it’s either the mother and her child, or the 15 soldiers and the suffering of their families back at home.

Think about being given that situation, about how devastating the experience must be and how haunting it must be to the person who has to make it. Now imagine having to make that same choice day, after day, after day, with your numbers climbing up until you’ve reached over 250 kills.

That’s the life of a soldier that Kyle has lived.

Kyle is portrayed in the film by Bradley Cooper, and both Cooper and Eastwood do a wonderful job representing Kyle here. They show that before he was a soldier, he was a citizen, an American with strong ideals and opinions and unafraid to show them or fight for them. Before he was shipped out and went on tour, they showed how normal Kyle was.

They showed that before he was a soldier, he was a man.

After having to make those difficult decisions day after day, how do you think that affects a man? In interviews, the real-life Kyle has said that he would not take back a single shot because every one that he took was to defend his brothers in uniform. I believe him when he says that, but I don’t believe that it didn’t leave an impact on him. Some soldiers suffer PTSD from killing just one man. How do you think more than 200 may have impacted Kyle?

Both Eastwood and Cooper do a great job humanizing Kyle here, and show that he’s more than the record kills he’s garnered. They show that Kyle is a man of coarse humor and blunt honesty, a man with a thick Texan accent and ideals, a man who tries to show that he’s strong and dependable, but who deep down is hurting and alone. The film is intimate in the ways that it shows Kyle, both in the chaos of battle and in the quietness of being home.

Cooper especially does a skillful job in portraying the iconic war hero. He expresses trauma and subtlety with the character so masterfully that the only differences I can tell between him and Kyle are minor facial features.

This movie has stirred controversy as of late for being “pro-war,” and for glorifying a man who was essentially labeled a murderer. I’m convinced these same people haven’t seen the same movie I saw, because the movie I watched unabashedly looks at the miseries of war and how the deaths Kyle could and couldn’t prevent affected him. The movie does suffer some slight pacing issues (not to mention the infamous “fake baby” seen in one of the shots), but when Eastwood resurrects a war hero to show the man behind the legacy, how can you look at this movie’s scope and not feel something for all of the physical and moral sacrifices Kyle had to give for his home? When the trumpet plays proudly over the solemnity in the end credits, you know that Eastwood represented a warrior in heart and a human in spirit.