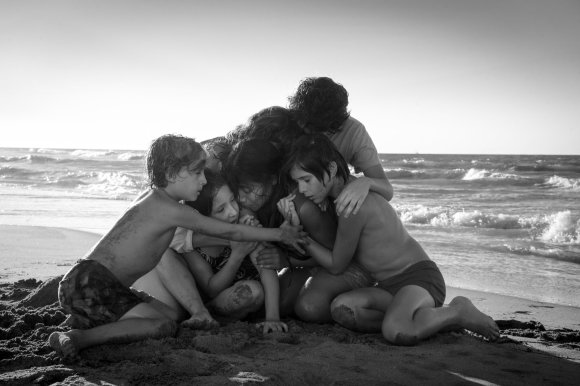 For some reason, the Madonna song “Vogue” came to mind while I was watching Roma, which is Alfonso Cuaron’s first Spanish film in 17 years since directing 2001’s Y Tu Mama Tambien. It’s the lyrics that specifically stick out to me, and despite Madonna’s jazzy disco groove and upbeat tempo, there’s a sadder story lying in the song about a woman trying to escape from life’s troubles. Everywhere she turns is heartache, she wants to escape the pain of life that she knows, and there’s a longing to be something better than what she is. And, perhaps most important, she learns that beauty is where you find it.

Alfonso Cuaron illustrates this sentiment early on in Roma. Whereas most movies work so hard to set up groundbreaking establishing shots that set the tone for the movie, Roma opens up on the black-and-white tile floor of a middle-class family in La Roma, Mexico City. The image itself is so plain and ordinary, and at first seems like an unusual opening shot for a family drama. But it’s what Cuaron does with the shot that makes it so compelling. Off-screen, we hear a maid throw soapy suds onto the tile floor, and the reflection raises a mesmerizing pattern of a broken yet beautiful city. Brick rooftops surround the image like a picture frame. Clouds break up the gray sky like cotton candy on a canvas. And far into the distance, a plane flies overhead, carrying its passengers into a new tomorrow.

The whole movie is like that, with Alfonso Cuaron finding captivation and interest in every frame, every pan, every close-up, every wide shot, and every sweeping capture of the scenery and sensation that’s on display. The cinematography never looks or feels forced, awkward, pretentious, or unearned. It is intimate and vivid, like a long-lost memory that has suddenly resurfaced back into your mind.

Roma is based on Alfonso Cuaron’s own childhood while growing up in La Roma with his parents and two brothers, as well as the caretakers that looked after them. Although much of the movie is based on Cuaron’s youth, the movie never makes it clear which character he’s supposed to be. In fact, I’m not even confident any singular one of the children in this movie is him. Any one of them could be him, or two of them, or even all of them.

The movie never specifies which is which, and it’s just as well. After all, Roma isn’t even about Alfonso. Instead it’s about his housemaid, played here by Yalitza Aparicio in her theatrical debut. While Roma does follow her everyday routine caring for the family and their children, the movie is about so much more than her work as a housemaid. It’s about her navigating life in 1970’s Mexico City during a period of political tension and upheaval. It’s about looking for love and finding heartbreak instead. It’s about finding balance and peace in a time where there is nothing but calamity and disturbance. It’s about searching for family and a home to belong to.

You can tell that Alfonso Cuaron comes from a very personal place in writing, directing, and shooting this small-scale epic, because the storytelling feels so honest. Cuaron himself is no stranger to making cinematic epics. He directed the third and arguably the best Harry Potter movie Prisoner of Azkaban, while the films Children of Men and Gravity were among the most thrilling science-fiction movies released in their respective decades. But Cuaron is coming from a much more intimate and vulnerable place with Roma, from the life experiences he’s portraying to the culture he’s paying homage to. The movie finds its heart in its most soft-spoken moments, like a mother whispering a lullaby to her child.

And newcomer Yalitza Aparicio is especially vital to making this movie resonate with us emotionally. Originally studying to be a preschool teacher, Yalitza stumbled onto this film when her sister encouraged her to audition. So much of her performance feels so natural and genuine, mostly because it is natural and genuine. Cuaron notably shot this film in sequence and would provide pages to the script days, sometimes even hours before shooting was supposed to begin so that the actors could more believably react to what they were experiencing. This leads to the most authentic and honest performance Cuaron could have pulled from Yalitza. She didn’t feel like an actress trying to mimic the part of a middle-class housemaid. She felt like she really was a young woman trying to navigate Mexico’s turmoils all by herself, and that wrapped you up in her journey all the more because of it.

Roma is a masterpiece. Go and see it. Movies come and go, but few capture your attention, your intrigue, your emotions, and your imagination as raptly as this picture does. Who would have dreamed years ago that when one humble woman accepted the job as a family’s housemaid that her life story would one day be told on the big screen? Imagine what stories Alfonso Cuaron’s children will tell of their father when he grows old.