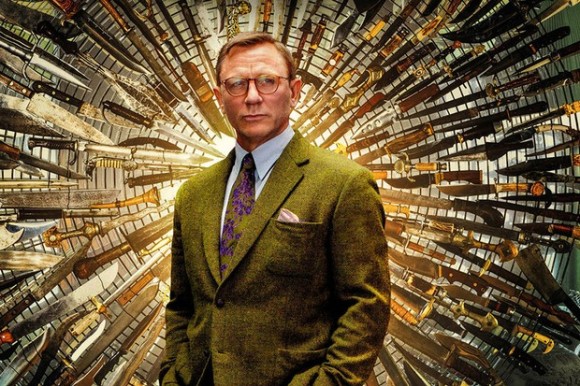 Sharp in more ways than one.

When Knives Out begins, we’re provided with the typical murder-mystery setup: Harlan Thrombey (Christopher Plummer), a famed mystery writer whose popularity is probably equal only to Stephen King, is found dead inside his mansion. His throat is slit, the blood flowed out onto the floor uninterrupted, and there were no signs of intrusion or trespass into his study. The detective working the case, Elliot (Lakeith Stanfield) thinks this was just a simple suicide and considers the case closed. Meanwhile, private investigator Benoit Blanc (Daniel Craig) suspects something more sinister had a role in Harlan Thrombey’s death: foul play.

The suspects mostly consist of Harlan’s privileged and wildly dysfunctional family. There’s Harlan’s daughter Linda (Jamie Lee Curtis) and her husband Richard (Don Johnson) and their smug and self-centered son Ransom (Chris Evans). There’s Harlan’s son Walt (Michael Shannon) who manages Harlan’s estate and his son, an alt-right online troll named Jacob (Jaeden Martell). There’s Harlan’s spoiled and greedy daughter Joni (Toni Collette) and her posh liberal arts daughter Meg (Katherine Langford). And then there’s Marta Cabrera (Ana De Armas), Harlan’s personal nurse who tended to his every need prior to his passing. All of these people were a part of Harlan’s life and loved him in one way or another. And, one of them supposedly murdered him. Blanc has eliminated no suspects, but as far as he’s concerned, all of them have something to gain from Harlan’s death.

Writing about movies like Knives Out is particularly challenging, not because there’s isn’t enough to talk about, but rather because there’s too much to talk about. Knives Out is a clever, ingenious, meticulous, observant, and deliciously deceptive movie, but it’s one where the audience benefits most from knowing as little as possible about it. I would argue that even the trailers give too much away for a movie like this. Since this is the case, I’m walking on very thin glass here and I don’t want to give away the enjoyment of the film before you can experience Knives Out for yourself.

I will say this: writer-director Rian Johnson is a mastermind behind this murder-mystery. Manipulating his characters like how a maestro conducts his orchestra or how a puppeteer commands their puppets, Johnson puts his characters through one puzzling scenario after another and giggles mischievously as he waits to spill the next big secret on his unsuspecting audience. I went in expecting Knives Out to go in a certain direction, then 15 minutes in Johnson spins my expectations directly on my head and does almost a complete 180. Then he plays with my mind and emotions for the next two hours until he drops one bombshell reveal on top of another, and then another, and then another, and then another.

Films like Knives Out are truly in rare quantity these days. Johnson put a lot of thought into this screenplay, into its characters and their actions, quirks, personalities, conflicts, wants, desires, disagreements, frustrations, and insecurities and then toys with them like he’s playing with silly putty. In many ways, Knives Out is very similar to his most recent film Star Wars: The Last Jedi, which as you may remember divided the Star Wars fan base more sharply than the 2016 Presidential elections divided the nation. Both films pull you in with a sense of anticipation and expectation, then it goes in a completely different direction and just leaves you with a stunned feeling of “what just happened?”

The difference is that Star Wars is an iconic blockbuster franchise, and fans are very passionate when drastic changes are made to characters they deeply care about. Knives Out is more primed for this sort of treatment because A) It is not part of an established franchise, B) The setup is original, and C) There’s much more freedom for Johnson to do whatever he wants with this premise. Part of the joy of this movie is that you have no idea which direction it’s going to go, and figuring it out along the way is just one of its many surprises.

The cast in this film is exceptional. Nobody is wasted in their role, nobody phones it in, and everybody plays their part exactly the way they need to. Granted, with this large of an ensemble cast, that inevitably means some characters will get shelved while others will get more screen time. Still, I wouldn’t hesitate to put any of these actor’s names forward for awards season. They all played their parts to the letter, and I would argue their efforts even deserve the Outstanding Cast accolade at the Screen Actors Guild Awards. And no, I’m not talking about a nomination: I’m talking about a win.

I don’t want to talk much about the cast because again, this movie benefits most from you knowing as little about them as possible. Two names I will bring up as being among the most entertaining performances are Daniel Craig’s and Chris Evans. These guys were hilarious, quirky, sardonic, and gleefully cunning in their own unique way. Craig’s talents as an actor don’t need much elaboration, as he can flip on a dime from being a slick spy action hero in Casino Royale and Skyfall to a mentally unhinged murderer in Infamous. Here he’s playing an old-fashioned Kentucky-fried fellow that would have Foghorn Leghorn laughing his feathers off at his accent. Chris Evans is especially surprising. For a guy who is known for playing such a genuine and good-hearted spirit as Captain America in the most recent Avengers movies, here he comes off as egotistical, condescending, and very full of himself. It’s hilarious watching him tell his entire family off in a pointed, matter-of-fact fashion, especially when you’re so not used to him playing the asshole in a movie.

I can’t sing enough praise about Knives Out. Go and see it. It’s a once-in-a-lifetime movie that is rarely done with this much thought, care, and attention to detail paid to it. If he wanted to, Rian Johnson could have taken the pages of his screenplay and turned them into his own mystery novel. Harlan Thrombey would be proud.