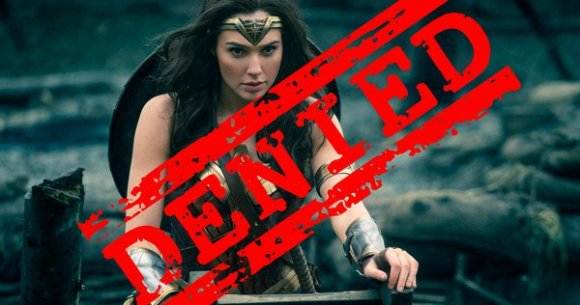 Have you heard about any of the Academy Award nominees? Yeah, me neither.

Like clockwork, the Academy Awards recently released their nominations for this year’s ceremonies. Unlike previous years where I wake up at my own leisure and read the nominees at my earliest convenience, I actually got up earlier the morning of the announcements and listened to the livestream on my way to work. Good gravy, are these people pretentious. The live-action shorts that played before the category announcements were so high-quality that they were better produced than many of the nominees themselves were. Can we recruit these people to make better films for these categories in future award ceremonies?

But never mind that, you’re not here to hear me gripe about the Hollywood elites. You’re wanting the breakdown on this year’s nominees. Let’s hop into it.

Leading the pack of best picture nominees this year is Guillermo Del Toro’s science-fiction romance The Shape of Water, a weird and uncomfortable movie about a fish creature falling in love with a woman. In hindsight, I passively admit that the film is mostly deserving of its 13 nominations. It is, after all, visually and aesthetically pleasing, and the creature himself has some of the most convincing effects I’ve seen in the past year. But I didn’t like the movie itself, feeling that it was too preachy and on-the-nose to be taken seriously. I do think Del Toro is very deserving of an Academy Award in general. His films Hellboy and Pacific Rim both pushed the boundaries in what could be achieved through visual storytelling, while Pan’s Labyrinth was a beautifully dark fantasy that put adult tragedies through the innocent eyes of a child (it’s actually one of my frustrations that film didn’t win best foreign language film at the 2007 Oscar ceremony). Will The Shape of Water be the film to break Del Toro’s losing streak? Possibly, but I can’t help but feel that parts of his earlier filmography are more deserving for an Oscar than The Shape of Water is.

The runner-up best picture nominee with the most nominations is Christopher Nolan’s Dunkirk, a World War II drama depicting the battles for French beaches, seas, and skies. Again, Christopher Nolan is a fantastic filmmaker: one of our generations best. But his earlier films are astronomically better compared to the sloppy, confused timeline that Dunkirk gave us. His first nominated film Memento was a mind-boggling and fascinating study of a decomposing mind, while The Dark Knight broke the boundaries between what we consider superhero movies and art. Inception is one of the greatest films this decade. Any one of these masterpieces could and should have been major contenders for best picture in previous ceremonies. Why is it suddenly that the lapsed, removed experience of Dunkirk is the one picture to suddenly give him a serious chance at the Oscars? Dunkirk is nominated for eight Academy Awards. It deserves five of them.

Side-note: In addition to Dunkirk’s best picture nomination, this is also the first time Nolan has been nominated for best director, merely getting only screenplay nominations in previous ceremonies. Regardless of what your opinion is on Dunkirk, can we at least agree that it is blatantly outrageous that this is Nolans’ first best director nomination?

Next is Three Billboards Outside Ebbing, Missouri, which places in this year’s ceremony with seven Oscar nominations. This is one picture you gotta look out for here, folks. It swept at both the Golden Globes and the Screen Actor Guild Awards, winning the highest prizes at both ceremonies. Its stars Frances McDormand and Sam Rockwell are both serious contenders for this year’s acting categories. Writer-director Martin McDonagh has a strong chance at the best original screenplay award. I haven’t watched the film yet, but it’s been racking up wins this awards season like a Star Wars movie stealing the holiday box office. Keep your eyes focused on this one.

Two surprise nominees here that I wasn’t expecting: the biopics Darkest Hour and Phantom Thread, both starring Hollywood heavyweights Gary Oldman and Daniel Day Lewis. The surprise here isn’t that they’re nominated for best picture, but that they’re nominated for five other Academy Awards besides it. I figured those two pictures were shoo-ins in the acting categories due to the reputation of its leads. I didn’t expect them to also slip in to the production design, costume, makeup, and cinematography categories as well. If anything, this shows that this year’s ceremonies are not as predictable as they usually are, and they’ll really contain their own twists and turns that none of us were expecting. I’m genuinely excited to see how these two films will impact the best picture race on Oscar night. 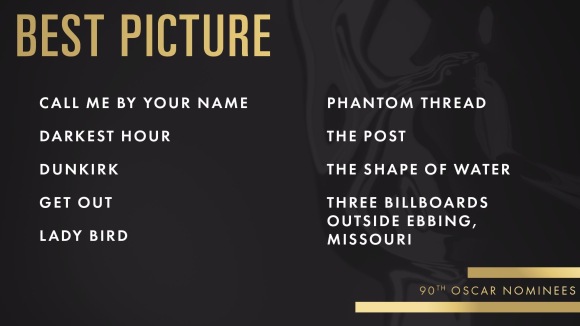 Also nominated for best picture is the coming-of-age drama Lady Bird, the gay romance film Call Me By Your Name, and the satire-comedy-horror picture Get Out. Out of all of the movies to be nominated for best picture this year, my favorite is easily Get Out. If you haven’t seen it yet, you absolutely need too. It’s one of the most creative films I’ve seen in years, making a provocative race commentary that is equal parts violent, scary, entertaining, and relevant to its intended audience. The fact that it’s nominated here not only for best picture, but also best director, actor, and screenplay makes my heart happy for writer-director Jordan Peele, who basically exploded onto the film scene with this directorial debut. One could only dream to have a year as successful as Peele did.

There’s one best picture nominee here that doesn’t belong. Not because it isn’t deserving, but because it isn’t fairly backed up by its other nominations: The Post. Don’t get me wrong, it absolutely deserves to be nominated for best picture. The journalism-drama tells the story of the Washington Post reporting team that broke the story on U.S. Government’s obscured involvement with the Vietnam War, which eventually developed into the Pentagon Papers expose. It very much is Oscar-worthy material. The issue is that it’s only nominated for one other award besides best picture, and that is best actress for Meryl Streep’s role in the film.

This isn’t the first time that this has happened in recent Oscar history. Extremely Loud and Incredibly Close was only nominated for best picture and best supporting actor for Max Von Sydow in 2012, while the Martin Luther King Jr. biopic Selma was only nominated for best picture and best original song in 2015. The worst of these offenses was Spotlight in 2016, which only won best original screenplay in addition to its best picture win. It is the only best picture winner in Oscar history to receive only two awards from the night.

This pity-nomination party has to stop in the Academy Awards. A film is not considered the best of the year for one actress alone, but for an assortment of cohesive elements that work together for the film. The director Steven Spielberg. The writer Josh Singer. The editor Michael Kahn. The cinematographer Janusz Kamiński. Streep’s co-star Tom Hanks. There was a lot of talent associated with this film, all of them equally deserving for attention as Streep was. Either give the film more nominations to support its best picture nomination, or don’t nominate it at all. There were plenty of other hard-hitting contenders that could have been nominated instead of The Post that have the nominations to back it up. Blade Runner 2049 with five nominations. Mudbound with four nominations. Baby Driver with three. You can make a case for any of these films and more to be nominated in the place of The Post due to its acting and technical nominees. Why on Earth are we giving out pity nominations for movies that can’t get more than two nominations from Academy board voters?

Overall, how do I feel about these nominations? Meh. They’re fine. I’m not really excited or maddened by their recognition here. They’re just kind of a passing mention of under-the-radar films to be aware of before you get to awards night.

I will say that, just like every year, there is obvious snubbing in categories where films did not deserve the disservice they received. You will notice, for instance, that Wonder Woman got zero nominations, despite being one of the biggest critical and commercial successes of the year. Detroit got zero nominations, despite its attention to detail and authentic depiction of such despicable events. The Stephen King horror film It got zero nominations, not even for makeup or supporting actor for its brilliant performance by Pennywise actor Bill Skarsgard. Good grief, even Logan got snubbed with Hugh Jackman and Patrick Stewart’s mesmerizing performances as old heroes reflecting on their broken selves (although it did impressively nab a best adapted screenplay nomination, the first superhero movie in Oscar history to ever receive such an honor).

But Academy Awards ratings have been consistently dropping, ever since its changes to the best picture category first proposed in 2010. Continuing to skip over mainstream films such as these is exactly why. Critics love the indie flicks that continue to surprise us in new ways, while moviegoing audiences love the occasional blockbusters that give them the escapism and entertainment that they need. It’s entirely possible to love and appreciate both of these kinds of films. Somebody please send the Academy the memo.