That lead probably worked better in my head rather than typed out. But if The Mummy has showed us anything, it is that my lead is still not the worst thing that was written this year.

Regardless, Walt Disney recently released their full voice cast for The Lion King remake, directed by The Jungle Book’s Jon Favreau. Many of the actors are unsurprising, especially when names such as Donald Glover have been circling the project since day one of development. Others were merely rumored until Disney confirmed their involvement late last night. 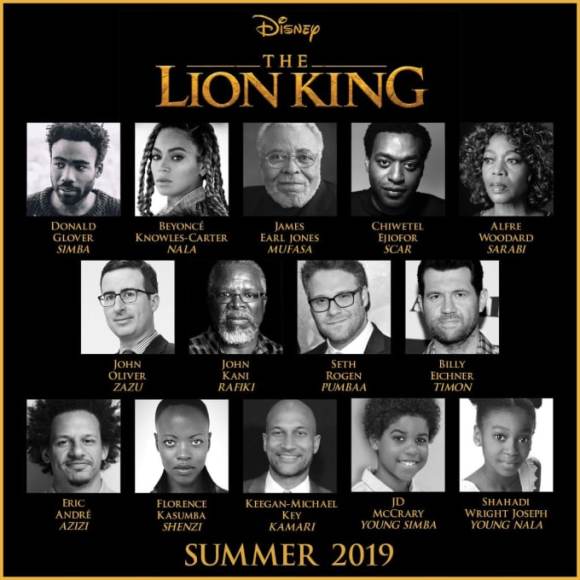 Gotta say, solid cast. Rogan and Oliver are excellent choices in their respective comedic roles, while Beyonce (a.k.a. BAE!) is pitch-perfect as Nala. My favorite casting by far is James Earl Jones, who is reprising his role as Simba’s father Mufasa from the original animated feature. The Jungle Book also a great cast associated with it (Bill Murray, Ben Kingsley, Idris Elba), but The Lion King easily knocks theirs out of the park. I can’t wait to see how these actors do in their respective parts.

One cast member that I am hesitant with: Chiwetel Ejiofor as the film’s villain Scar. Now don’t get me wrong, I love Ejiofor as an actor, and I have no doubt he’ll be great in this role. Why in 12 Years A Slave he was the best part in it by far, and he was also great as a supporting role in films including The Martian and Doctor Strange. But earlier this year, Hugh Jackman was among those rumored to be in the running for Scar. That ended up being an April fool’s joke, but after I heard that I couldn’t picture anybody else in the role. Seriously, listen to Hugh Jackman’s voice the next time you rewatch him as Wolverine in any of the older X-Men films. Tell me you don’t hear a perfect Scar behind that grisly growl of his.

Either way, it looks like Disney is all-hands-on-deck for their Lion King remake. We’ll have to wait until 2019 to see how far the horizon goes.