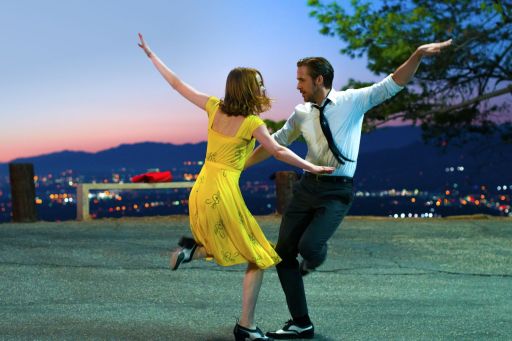 So does “LA” refer to music, or Los Angeles?

Musicals don’t exist in realms of reality. If you have this as your mindset when you go into a musical, 9/10 times you won’t be dissapointed. This expectation helped me to enjoy La La Land, a delightful, energetic musical experiment that is equal parts joyful, uplifting, and honest with itself. I enjoyed it very much even though I knew it wasn’t realistic, and that’s part of the influence of cinema: escaping one reality so you may be immersed in another.

Taking place in modern-day Los Angeles, La La Land follows two hopeful dreamers who aspire to be successful Hollywood artists. Mia (Emma Stone) is a down-on-her-luck actress who works as a barista while simultaneously auditioning for shows. Sebastian (Ryan Gosling) is a jazz pianist who was recently fired from his performance job at a nightclub. As these two run into each other coincidence after coincidence, they soon fall in love with their artistry, and eventually, each other.

With La La Land being the third film written and directed by Damien Chazelle, it feels strange that he would want to come back and do a musical. His last film, the masterfully-paced and enthralling Whiplash, was a tense exercise in perfection and practice, while 10 Cloverfield Lane also demonstrated Chazelle’s characteristics of pacing with tension. La La Land, however, feels so starkly different from those films. From the emotional mood to the artistic direction, La La Land exists in ambiance, throwing you back to the classic musical days where characters broke out into song and dance instead of engaging in conversation with each other. If Whiplash is a vicious, violent train chugging down the tracks at a lethal pace, La La Land is like a feather, whimsically dancing in the wind as it quietly falls down to its next restful stop.

That change of mood is fine. What isn’t is sacrificing quality along with it, and La La Land definitely has a few things to answer for, particularly in the runtime. The movie is two hours and eight minutes long, and it definitely feels like it. From the writing to the editing, there were small things in there that were not needed and could have been resolved with a few quick rewrites and tighter edits.

Example: In the middle of the movie, Mia is caught in a love triangle between Sebastian and her boyfriend Greg (portrayed by Finn Wittrock). None of these scenes were needed. None of them. Greg served no purpose in the film other than just to have Finn Wittrock in it, who admittedly is a talented actor, but that’s not a good enough reason to have him awkwardly shoved in here. He offered no development in either Mia or Sebastian’s story, and the film would have moved on much more smoothly without him in there as a distraction.

There’s other small things, from the sudden dance montages to characters conveniently lacking cell phones in really useful moments (I.e. at Sebastian and Mia’s first meeting, when he asks her out on their first date, when she gets an audition callback, etc.). In an age where cell phones flood every part of our culture, it’s so hard to imagine two people lacking them so often, especially in the heart of a city like L.A.

Compare this to the tempo and flow of Whiplash. Nothing is wasted in that film. Nothing. Every practice scene, every beating of the drum, every fiery argument between Neiman and Fletcher drives home a point about passion and sacrifice. Whiplash was tight, effective, and masterful in its art. La La Land has more fun with it.

That’s not to say La La Land isn’t enjoyable. It definitely has an upbeat, feel-good rhythm to it, guaranteed to get you dancing on your feet and humming the song’s melodies out loud. Part of this is because of the wholly earnest energy sprouting from Gosling and Stone’s chemistry. With this being their third collaboration together (the first two being Crazy, Stupid, Love and Gangster Squad), this film is easily the best representation of their talents together. They do well no matter what scene they’re in, whether they’re subtly flirting with each other, sharing a moment of romantic passion, dancing the night away in a wonderful musical number, or are arguing in a heated moment. They make every moment come alive and immediate. Stone especially demonstrates immersive talent, and in her audition scenes as an actress, she feels like she’s playing two characters at once. That’s because she is.

I like a lot of things about this film. The music is catchy and meaningful, with each number saying more in each scene than character’s dialogue can sometimes. The set design is bright, vibrant, and colorful, with some scenes painting a more vivid picture than any painting or photograph can. The choreography is especially impressive, with characters moving, leaping, tap-dancing, and flying into synchronized rhythms in-time with the music.

As a musical, La La Land fulfills every requirement and then some, with it being not just catchy and melodic, but also visually spectacular and dynamic. It could have been more effective in some areas, but at the end of the day, Chazelle is doing what he loves by telling this story about two unlikely lovers pursuing their dreams. We can learn an important lesson here. It’s easy to give up on the impossible. It’s hard to pursue your dreams. Imagine what it feels like reaching them.