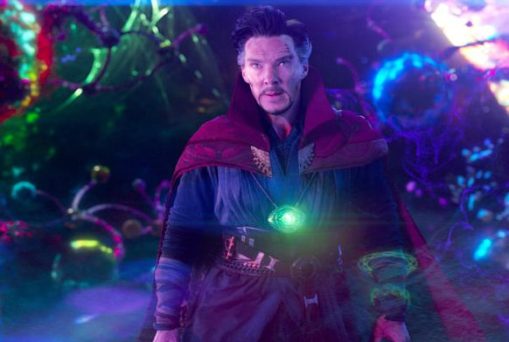 The Marvel universe, but stranger.

It’s so hard to be unique in the day and age of the modern superhero epic. We’re relatively familiar with the formula by now. Guy X gets superpowers, Guy X goes through training to learn how to use powers, Guy X meets Guy Y who becomes his arch nemesis, both Guys have epic fight where Guy X wins and ultimately accepts his superhero destiny. In just one sentence, I’ve more or less named the outline of multiple superhero movies, from Superman all the way to The Avengers. And make no mistake: this is the exact same outline for Doctor Strange as well.

This much is how Doctor Strange is similar to its superheroic peers. Where it’s different is in its execution, in how it handles its title character not as a larger-than-life action hero, but as a man, fatally egotistical, selfish, eccentric, ignorant, and most of all, flawed. This is not a guy who wraps a cape around himself and fights for truth, justice, and the American way. This is the guy who looks at the cape and scoffs, asking why he should put it on if it looks so ridiculous on him.

Perhaps his flaws are exactly why we relate to Stephen Strange as much as we do in the film. In Iron Man, Tony Stark was a war profiteer and shameless opportunist who repented of his ways once he realized the repercussions of his actions. In Batman Begins, Bruce Wayne was a broken and resentful young man bent on revenge before realizing that it would only sink him into a deeper, darker place. For Doctor Strange, Benedict Cumberbatch plays the brilliant surgeon who is as thick-headed and self-centered as he is skilled and talented. Great doctor. Awful person.

This is all before Strange gets into a devastating car crash that crushes his hands and permanently damages the nerves in them, removing his ability to be a doctor. He spends all of his time and money to repair his hands, only to come up short in every direction he turns. His last ditch effort is to visit a monk called The Ancient One (Tilda Swinton) in Nepal, who has helped individuals with impossible recoveries from all around the world. What Strange doesn’t realize is that he’s about the be flung into a world full of sorcery and supernatural forces, and he’s somehow at the heart of it all.

First things first: the visual effects. I know they’re usually my first positive point of mention in most superhero movies, even in bad ones like Batman V. Superman. But Doctor Strange is on a visual caliber on a whole another level. In an early action sequence, sorcerers are shifting buildings, roads, architectures all around them, all while whipping out weapons and kung-fu fighting each other on constantly shifting walls, pillars, windows, ledges, and walkways. In a later scene, Strange is thrown through the multiverse, a constantly-shifting panorama of space that looks like you’re looking through the lens of a kaleidoscope. In most superhero movies, the visual appeal comes from the action scenes and how explosively people can punch or throw each other. But in Doctor Strange, the appeal is in the scenery surrounding Strange, how the sorcerers interact with environments, and how they affect the upside-down, wayward fights that are so mindbogglingly perplexing. Not since Avatar or Inception have the visuals been so sensory that they felt more like an out-of-body experience rather than a cinematic one.

But the visual effects are not the only impressive thing with this film: its also in how they are used. Director Scott Derrickson, who before this has made the equally atmospheric Sinister, smartly uses the visuals not for blockbuster spectacle, but as advancement for the story. In most action movies, the film usually builds up to some action-packed, destructive, prolonged fight that ends with a lot of property damage and civilian casualties. That is what most gripes were with 2013’s Man of Steel, at least. But here, the climax doesn’t involve destroying a city block, but rather trying to save one, as well as the many lives that are on it. I’m not going to reveal any spoilers, but in an entertainment industry that celebrates violence and killing, it’s nice to see a movie that is the antithesis of that, and looks for a smarter, more thoughtful conclusion rather than the more adrenaline-fueled one.

The cast is on par with the rest of the film’s spectacle. Swinton is fierce yet serene as the Ancient One, a mentor figure that isn’t as innocent and angelic as she may appear. Chiwetel Ejiofor is a companion of Strange’s named Mordo, and while most movie sidekicks are passionate loyalists who could never betray their beloved hero, Mordo here has his own motivations and reasonings that make him a complex, fascinating character in his own right. And Mads Mikkelsen portrays the movie’s villain, and while he is slightly typecast, he at least plays the role with passion and intimidation, making him one of the more memorable recent villains in the Marvel universe.

But the most impressive performance is easily Benedict Cumberbatch’s. The more movies you watch him in, the more you see his range as an actor and how he can do different roles so well. Seeing him portray real-life figures in The Fifth Estate and The Imitation Game, then watching him embrace villainous roles in Star Trek: Into Darkness and The Hobbit movies, you wondered how exactly he was going to approach Doctor Strange as something he’s never been before: a superhero. He brings exactly to Doctor Strange what he brings with his other roles: charisma and authenticity. His American accent makes him almost unrecognizable as the good doctor, and the earnest, yet self-centered way he carries himself makes him all the more believable, making Stephen Strange feel more human rather than hero.

Rumors have been swirling around that Doctor Strange might take over for Iron Man as the new face of the MCU. After seeing this movie, I wouldn’t mind that one bit. Cumberbatch plays him as a charismatic, narcissistic, almost Shakespearean character that is regretful of his old self that looks to start anew. Cumberbatch’s performance in conjunction with the film’s writing makes Doctor Strange a very fun, relatable, and likeable character, if not a great superhero already.

Does Doctor Strange break barriers for the superhero genre? Well no, not if you’re comparing it to the likes of Captain America: Civil War, which challenges the heroes morally as it does physically. But for what Doctor Strange does do, it does well, and it stands firmly alongside its Marvel family, including the likes of Iron Man and Spider-Man. This is one doctor you won’t regret calling.