You can’t say the night wasn’t a wild ride. 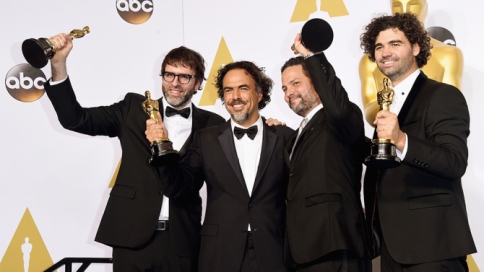 Every time I prepare myself for the Academy Awards, I end up getting usurped in every single angle possible. At the start of this season’s Awards race, Boyhood was getting the most attention and seemed the most likely to win the ceremony’s biggest awards. But by the end of the night, Birdman and Grand Budapest Hotel took the most awards from the night while Boyhood only walked away with one acting award for Patricia Arquette.

This is the one thing I love about the Academy Awards, if I even loved anything about it in the first place: it always finds a way to surprise you.

Even though the films I loved the most didn’t win the night’s most major awards, I’m mostly not upset. The Academy Awards was a night where some dreams were realized and others were crushed, but it nevertheless gave everyone something to aspire to. As I remember Matthew McConaughey’s speech from last year, “I’m always trying to be better than myself ten years from now.”

Anyhow, on to the winners. I predicted 18 out of the 24 categories correct, which is surprising for me because I expected to get more wrong. Regardless, the night held it’s own fair amount of shocks and surprises, so let’s hop right into them.

Best Picture: I was correct in predicting Birdman would win best picture, even though I would have preferred it gone to the likes of Selma, Whiplash, or even Boyhood. Still, it is a unique film, and it’s achievements are unmistakable. I was happy to see Alejandro Gonzalez Inarritu win for his hard work.

Best Director: Alejandro also won the Academy Award in directing for Birdman. No surprise there, considering he won the DGA. I am annoyed that Richard Linklater wasn’t honored for his 12-year commitment that was Boyhood, but I have to recognize that both films were works of high art and achievement. To pick one over the other is like picking apples to oranges, so I don’t judge the Academy for being given such a difficult decision to choose from.

Although I preferred #Boyhood over #Birdman, Alejandro hit the nail on the head with his speech. Time is the greatest judge of film. #Oscars

Best Actor: Eddie Redmayne won the best acting Oscar for portraying Stephen Hawking in the most tragically grounded of ways in The Theory of Everything. His acceptance speech was one of the cutest to have seen from the night.

So thrilled for Eddie!!!!!! #Oscars2015 #TheoryofEverything

“There’s no such thing as best actress.” Oh, I like this woman. #StillAlice #JulianneMoore #Oscars #UTAOscars #Oscars2015

I’m so happy for J.K. Simmons.

#Ocars2015: J.K. Simmons takes home the 1st award of the night. Have you called your mom yet? http://t.co/9MXDiPdj2g pic.twitter.com/FTVUDHV2pt

Best Supporting Actress: Patricia Arquette won in her role as an aging mother losing her children to adulthood in the brilliantly made Boyhood.

Standing O for the heart of BOYHOOD

I had the chance to recently sit down with director Alejandro Innaritu to talk about his new film “Birdman”. http://t.co/dcmOwgaOw4

Best Adapted Screenplay: Since Whiplash can’t technically be considered an adapted work, Graham Moore rightfully deserved the award for The Imitation Game. Moore’s speech was my absolute favorite of the night.

Congratulations to The #ImitationGame writer @MrGrahamMoore on his @TheAcademy Award for Best Adapted Screenplay. pic.twitter.com/If6pv0QP5O

Graham Moore won Best Adapted Screenplay for The Imitation Game at the #Oscars and gave a very brave speech. pic.twitter.com/RmDD2gJpbP

Best Animated Feature:  The first category I got wrong was a category I shouldn’t have gotten wrong at all: Big Hero 6 won best animated feature over the genius of How To Train Your Dragon 2. As you can see, I was not happy about this. Not. One. Bit.

Like, one snub was bad enough for @TheLEGOMovie. But snubbing #howtotrainyourdragon2 is straight up unforgivable.#snubbed #Oscars #UTAOscars

This is seriously going to bother me all night. #snubbed #howtotrainyourdragon2 #oscars #UTAOscars #Oscars2015

Best Documentary Feature: Citizenfour won the Academy Award for best documentary feature. If I didn’t want to see the award so badly before, I definitely wanted to see it even more now.

Oscar winning doc @citizenfour is on @Channel4 on Wednesday night at 11:05pm. Not to be missed. pic.twitter.com/5GJ40s6Mlu”

Best Film Editing: I got this category wrong, but it was wrong I was happy to get wrong: Tom Cross beat out Sandra Adhair from Boyhood with Whiplash, and that’s so appropriate considering how many smash cuts he has to conduct from the film at such precise moments for it to work.

WHOA. In a trick play, #Whiplash won best editing. It’s the most deserving out of any of the other nominees. #oscars #UTAOscars #Oscars2015

Best Cinematography: Another one extremely deserving in the award: Emanuel Lubeski won for the second year in a row for Birdman.

Second year in a row for Emanuel Lubeski … Cinematography … he also won for Gravity. #LNPOscars

Best Original Score: I got this category wrong too, but this is another one where I was happy to lose it: Alexandre Deplat won best original score for The Grand Budapest Hotel. After being nominated six times prior, I’d say the award was long overdue. He certainly was more deserving than The Theory of Everything was, at least.

YES!! Alexandre Desplat won best score! (I would have preferred it to #ImitationGame over #GrandBudapest, but it’s well deserved regardless.

Best Original Song: John Legend and Common both rightfully won the Academy Award for best original song with “Glory”. Members from the audience started crying after they finished their performance.

Best Makeup and Hairstyling: Grand Budapest also won the Oscar for it’s makeup, though I felt it wasn’t the most deserving nominee.

Best Production Design: Grand Budapest won it’s fourth award for production design, but as you can see, I was still so distraught by How To Train Your Dragon 2’s horrible loss that I barely even cared.

Best Sound Editing and Mixing: American Sniper and Whiplash won in these categories, respectively. I incorrectly predicted it would be Interstellar, but how on Earth would you know considering how flippantly the Oscars switches sides?

Feast, The Phone Call, and Crisis Hotline: Veterans Press 1 won in all of the short categories. Since nobody even watches those nominees, however, do you really even care?

At the end of the night, it was the live-action short, film editing, original score, animated feature (ugh), and sound editing and mixing categories that cost me losing to my mother at the Academy Awards predictions. Don’t remind me on how embarrassing that is.

Next year, I’ll work to refine my predictions so that I’ll be so accurate at guessing the Oscars, the Academy Award voters will think I stole the results beforehand.

On that note, you’re wrong Academy. Lego Movie should have been nominated. How To Train Your Dragon 2 should have won.

I’ll leave you to ponder on the great mistakes you’ve made this year.