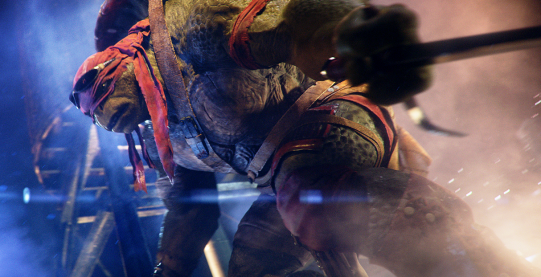 Teenage Mutant Ninja Turtles is in complete and utter shambles, a movie that can’t decide on what it wants to be and not much better on how it wants to accomplish that. At times, it’s a loud and obnoxious action movie that takes its characters and their situations seriously. At other times, it’s so campy and immature it might as well be the Nickelodeon cartoon series. Wait, I take that back, that’s a dishonor to the Nickelodeon cartoon series. I don’t know what sort of movie I was expecting out of something titled Teenage Mutant Ninja Turtles, but I would have taken anything over this travesty.

Based (somewhat) on Kevin Eastman and Peter Laird’s comic-book creations, Teenage Mutant Ninja Turtles follows the story of April O’Neil (Megan Fox), a struggling news reporter who is looking to uncover the criminal conspiracy of the Foot Clan, a team of specialized military-trained soldiers who fight for their master, Shredder (Tohoru Masamune). Shredder is tyrannical Japanese warlord who wants nothing more but to rule New York City, and like all dark and obscure bad guys, he’ll stop at nothing until he gets what he’s after. But April’s not alone in this fight; she also has her pet rat and turtles by her side, her little friends she’s cared for since they were experimented on by her father when she was just a little girl.

…What? Yes, dear readers, they changed the origin story. After Mr. O’Neil discovered how the dangerous turtle weapons were going to be used for destructive purposes, he sets his lab ablaze, killing himself and destroying all of his hard work. Just before the turtles could be destroyed, however, April saves her small friends from the fire and they escape into the sewers. (Question: Since the fire is so hot that it consumes her father nearly instantly, how is it that  6-year old April manages to not only get into the lab, but also avoid the fire, grab the turtles, get out of the lab, and get back onto the pavement with a little ash makeup spread onto her face for good measure?)

As years pass, the rat and turtles mature into giant-sized humanoid creatures who teach themselves the art of ninjutsu, thanks to a book they fished out of the garbage and the convenience the script allowed them. The rat named Splinter (Tony Shalhoub) trained his sons Leonardo (Johnny Knoxville), Raphael (Alan Ritchson), Donatello (Jeremy Howard) and Michelangelo (Noel Fisher), knowing one day that they would need to fight the Shredder and defend New York City.

Where do I even begin with this? For starters, the script is unreliable, an immature, idiotic and thinly-written-and-thought-out mess that has plot holes the size of Swiss cheese and is as convenient as the dollar store. I could be cheap and pick apart the small things in the story, like what compelled the scientists to pick turtles as their experiments of mass destruction?

That, however, is too easy. It’s much more fun to pick apart the bigger holes in the plot, including:

Oh yes, this script is a mess, and the actors do a nice job at making it even more laughable through their complacent, boring and plastic performances that could be played better by action figures. Any actor who was not a CGI character was completely wasted in a sea of bad dialogue and bland delivery, looking like victims to the screenplay and to the movie that they’re playing in. William Fichtner is hesitantly the best performance as an evil scientist, but his character is so plainly forgettable that it is almost completely wasted. Arnett is more charismatic and smirking as the camera man, but the dialogue he sputters is so unbelievably written at times that it hardly matters. (Ex. When told that your city’s vigilantes are giant turtles, is your first reaction to seriously ask if they’re aliens? I’m frankly surprised he didn’t laugh when April told him her crazy story.)

But the worst performance of the film is Megan Fox’s. Oh. My. God. What is she doing in the movie industry? Her performance was both disinterested and disingenuous, her expression looking as stiff and uncomfortable as if she came out of a facelift surgery. Fox is not a good actress. I say it again: Fox is not a good actress. Good-looking, yes, but looks only make half of a character, and she doesn’t fit April in neither appearance or spirit. In the 1990 film we had Judith Hoag portraying April, and boy, did she bring energy and enthusiasm to the character. Now we have Fox reading a teleprompter to replace the performance, and I start wondering if it would be better if April was recast as a Barbie doll in the movie.

Yes, the turtles, Splinter and Shredder look cool, and there’s a very sweet action sequence where they are sliding down the snow mountains that I will admit to have enjoyed. But in a visually-dominated industry, visual effects are a compliment I’m recycling at this point. Visual effects and fight scenes are wasted if you have a terrible plot, and in this case, where the bad guy’s master plan is to intoxicate a city with a poisonous gas by smashing a tower over it (an idea stolen from The Amazing Spider-man, by the way), I’m not inclined to say that the movie has much good of anything.

I know there is an audience for Teenage Mutant Ninja Turtles, and the majority of them will probably be under 12. The ones over that age will have grown up with the franchise, and will be looking for some sort of nostalgic experience to remind them of what it was like to grow up with the ninja turtles. I too went in hoping to feel some sort of nostalgia, but as the movie went on, I continued to notice that all of my hopes were running down the sewer.