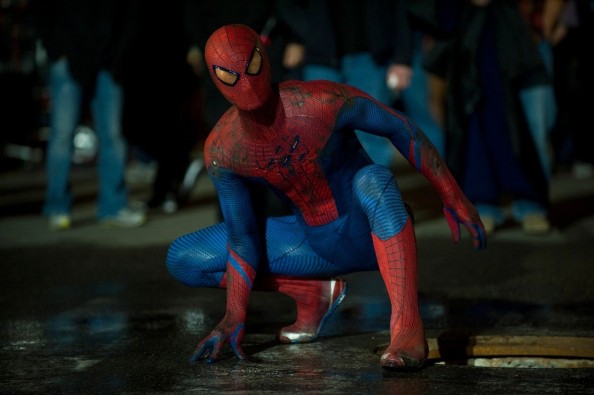 If I were to have a reboot of one of my favorite superhero films made just ten years ago, The Amazing Spider-man would be that reboot. What can I say about the film that will accurately do it justice? That it is exciting, suspenseful and displays visual effects that leaves the old one in the dust? That the writing is just as acute and skilled as the direction is? That Andrew Garfield has perfect chemistry with Emma Stone? No. Instead, I will describe the film by simply using just one word: amazing.

When Peter Parker was a young, bright-minded child, he lived in the content and warmth of his parents home. When his house was broken into, his father’s office searched through in every crook and cranny, his father Richard (Campbell Scott) quickly packs a suitcase, drives Peter to his Uncle Ben (Martin Sheen) and Aunt May’s (Sally Field) house, and tells Peter him and his mother will be gone for a while. A few days later, the plane that Peter’s parents were on was reported to have crashed. They didn’t make it out.

Twelve years later, Peter (Now played by Andrew Garfield), now in his teen years, is in high school, gets picked on by the local bullies every now and then, and has a crush on this pretty blonde-haired genius named Gwen Stacy (Emma Stone). While in the basement one day helping his Uncle unclog the water pipe, Peter makes an interesting discovery: his father’s briefcase, filled with notes, theories, and algorithms Peter has never seen before. While looking and studying the notes his father left behind, Peter realizes everything points to one scientific company in particular: Oscorp.

From there, Peter snoops around, goes into a lab he wasn’t supposed to go into, a radioactive spider bites him, and well… you probably already know where it goes from there.

If we look at the story, it is on repeat from the first Spider-man. But the repeat isn’t what we care about. The Amazing Spider-man is done with a new style, energy, and enthusiasm to it than the original one was. Funny, I didn’t expect this movie to be as energetic as it is. This film is directed by Mark Webb, who to date, his only directing experience being music videos and the 2009 romantic-comedy 500 Days of Summer. Quite a difference in genres, I know, but Webb handles the transition well. He makes Spider-man as he sees it, as a young man coming out of puberty using his powers for playful, mischievous reasons rather than the heroic acts of courage and responsibility that most heroes are known for. This Spider-man is more jokey and sarcastic than the original one, spitting witty one-liners while arresting a criminal or web swinging past bystanders.

He fuels the action scenes, inspires laughs, and is the source for original entertainment. If Tobey Maguire is the more emotional Spider-man, this Spider-man is the more sporadic and amusing one.

Andrew Garfield does a great job in portraying this Spider-man in a totally different dynamic. His character is definitely different, retorting to puns, jokes, and one-liners that would only result with awkward silences if Tobey Maguire tried to pull off the same thing. Garfield, however, is more talented than a one-dimensional joker. Like any great actor, his character portrays a flurry of emotions, and he portrays all of these emotions well. We can tell exactly when he is troubled or concerned, when he is angered and enraged, when he is happy and content, or when he is saddened and alone. Peter experiences many tragedies in this movie, and Garfield does a good job expressing the emotions for all of them. Emma Stone, equally, is incredible in this movie, providing the film’s beautiful, smart heroine. Together, their chemistry is irreplaceable, and forms a romance that rivals that of the chemistry Maguire and Dunst made in the original Spider-man movies.

Here is, regardless of pre-conceived opinions, a great movie. It is a blockbuster that does a great job balancing in between spectacular action, heartfelt emotion, and genuine humor, all combining into a reboot that makes it not only fun, but unique in its own right.

From a technical perspective, this film has no flaws. It, however, is not about what it did wrong; its a matter of who did it better.

The biggest weakness with The Amazing Spider-man is its release date. This is ten years after the first movie came out, and five years after its most recent one. Why did it need a reboot? It cannot help but bring up the comparison game when you watch this movie. And what happens when you compare things? You recognize which one did things better, and which one did things weaker. In comparison to the old one, The Amazing Spider-man cannot help but look inferior.

But how, exactly? The flaw exists in the writing, dear reader. There are just simply not enough moments in the film that are as emotionally real or relevant as there was in the first two Spider-man movies. Take, for example, the scene in the original Spider-man where Peter’s Uncle Ben dies because Peter did nothing to stop a criminal that ran past him. In the original film, this was a tragic, painful, and heartbroken realization for Peter that it was not the burglar who killed Uncle Ben, but Peter’s inaction and lack of doing the right thing. Here, it’s just on repeat as something that Peter needs to go through in order to become Spider-man. Peter, however, never acknowledges his responsibility in the matter, and neither does he ever even confront the criminal. How, then, does the issue ever become resolved? Answer: it does not. At the end of the film, everything is resolved except for that one specific conflict.

That’s the film’s only real weakness. I don’t want to go on about this weakness, though, because I’d be beating the bush. The main point: The Amazing Spider-man is still utterly fantastic. It is action-packed, suspenseful, energetic, relentless, exciting, humorous, and highly, highly entertaining. The production is all-around strong, the cast is even stronger, and the story is as driven and purposeful as it has ever been, despite a few moments of misplaced emotion. This is a reboot to one of my favorite superhero films of all time, and the surprise is I wouldn’t mind seeing a sequel to it in the slightest.