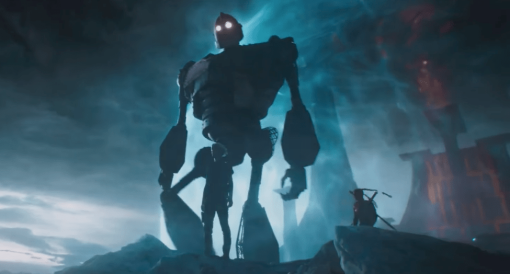 Ready Player One is a celebration of entertainment, a pop-culture explosion jam-packed with all of your favorite characters, icons, and memorable moments from your childhood growing up. I couldn’t tell you how many times I grinned ear-to-ear while watching this film, or how many times I jumped up and down in my seat in excitement, or how many times I was overwhelmed from recognizing all of the cameos popping up on the screen at once. This film could have been retitled as Easter Egg: The Movie, because that’s exactly what it is: one giant, gorgeous, deliciously colorful Easter Egg, and man is it fantastic to look at.

Taking place in Columbus, Ohio in 2045, Ready Player One shows us a dystopian future devastated by the effects of climate change and economic inequality. The middle class no longer exists. People live in sheds and old trailer homes instead of houses. The education system is practically non-existent. And no matter where you turn, all signs point to old American life ceasing to exist.

Enter the Oasis, a virtual reality experience where just about anything is possible. The Oasis has become people’s new reality: their place of escape. And whether they’re racing in a re-creation of 1940’s New York City, dancing in an anti-gravity night club, or literally building their own “Minecraft” world, the Oasis is a national treasure that everyone shares together.

One day, the creator of the Oasis James Halliday (Mark Rylance) passes away, but before he does he records a message for all of his video-gaming fans everywhere. He says that he’s hidden an Easter Egg in the Oasis, an object which hands control of the Oasis over to whoever finds it first. Now determined to find the Easter Egg before business CEO and corporate shrill Nolan Sorrento (Ben Mendelsohn), Wade Watts (Tye Sheridan) teams up with his friends to find the Easter Egg and save the Oasis.

The appeal in Ready Player One lies in its nostalgic value; in your ability to discern entertainment icons and characters and get excited at their unexpected appearance. This, of course, seems too simple to be taken seriously. However, Ready Player One is a simple film, and it never asked to be taken seriously. With these rules established, we’re ready to plow ahead and dive head-first into all of the pop-culture fun this movie delivers, and man does it deliver it.

How common are the Easter Eggs in Ready Player One? Very. They are so prominent in the film that they are as integral as the visual effects themselves are. Virtually every scene has at least one throwback to 80’s or 90’s culture. In one of the earliest shots, for instance, Wade can be seen driving around in the Delorean from the Back to the Future franchise. I’m telling you guys, after 28 years with its engine shut off, there’s no greater joy than seeing the Delorean revved up again and tearing the streets up, even if the Delorean and those streets are artificial.

That’s only one Easter Egg among hundreds. King Kong is back from the dead ripping buildings apart, the Iron Giant is reactivated after being shut off for several years, and there’s even a blood-soaked tribute to Stanley Kubrick’s The Shining. My favorite cameo was one where the Chucky Doll was tossed into a crowd like a grenade, and he starts slicing through hoards of computer-generated enemies like a mincemeat grinder. Yes, a Chucky Doll will do that in this movie. It will do a lot of things.

The cameos, the Easter Eggs, the surprise appearances: they’re all so fun and exciting to watch, and it’s a pure joy to just glance at the screen at random moments and go “Oh look, it’s so-and-so! And also what’s-his-name!” But that’s not the core component of the movie. It’s an important one, yes, but what makes Ready Player One so cherishing is how much these characters mean to these kids playing as them. We’ve all been through those moments in our childhood where we grab our toys, trucks, and action figures and spit out silly noises as we scream and pretend like our toys are fighting each other. Ready Player One is the video-game equivalent of that. Yes, these kids and the villains they’re fighting are inhabiting a fictional world, but the love and passion they have for it is not. For them, it’s as real as any action figure, costume, and video-game controller ever could be. The Oasis is not based in reality, no. But it is their reality, and that’s the important part.

In that, Steven Spielberg finds the human part of this story; the part that turns this movie from merely an entertaining experience to an extraordinary one. When Steven Spielberg was filming the underwater scenes for his shark film Jaws, or had E.T. pointing to Elliot’s forehead, or had that magnificent T-Rex let out a loud, dominant roar in Jurassic Park, he didn’t make any of these scenes from the corporate, money-grabbing mindset of Nolan Sorrento. He created these moments like the kids in Ready Player One created theirs, thinking, dreaming, and playing like storytellers in their own worlds. In that, Spielberg speaks to something much more profound than the need to be entertained: he speaks to the much larger questions of creating ourselves.

Yes, Ready Player One’s message is a straightforward one. But then, it was meant to be straightforward. What we are given here is not an opportunity to critique, but an opportunity to place ourselves in the VR mindset of these kids, let loose, and have fun. And for all of the action, visual spectacle, humor, heart, and fun that this movie delivers, Ready Player One has only one flaw, and that is that the Super Mario Bros. didn’t make an appearance.