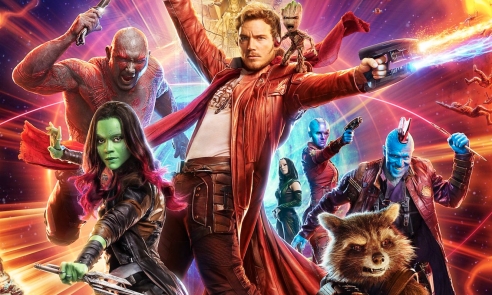 Guardians of the Galaxy is irrevocably stupid. Whether you’re a fan or not, this is generally considered consensus among viewers. This is a superhero movie filled with wise-cracking bounty hunters, green-skinned assassins, talking trees, raccoons, and even ducks. If you had told me about a movie like this 10 years ago, I would have laughed you off and said “Leave me alone, I’m trying to watch Spider-Man 3”.

And yet, Guardians of the Galaxy became an instant classic: a surprise hit nobody was expecting. That’s because writer-director James Gunn found an impeccable balance between action, humor, wit, drama, and in-cheek satire only the most passionate Marvel fans could catch. Guardians wasn’t just a great superhero movie: it was a great movie period. It’s energy, originality, and irresistible sense of style breathed life into its absurd premise, playing well on its strengths while downplaying its potential weaknesses.

Guardians of the Galaxy Vol. 2 has all of the elements of the first movie, just more haphazardly assembled. The action is still great, the cast remains phenomenal in their roles, and Gunn is equally skilled in throwing in some entertaining Easter Eggs every once in a while. But the tone is off. The jokes don’t land as much. The emotions don’t hit as hard. And no matter how you slice it, Vol. 2 is just a lesser version of Vol. 1. Disappointing, but not surprising.

In this sequel to the star-studded sci-fi blockbuster, Peter Quill, a.k.a. Star-Lord (Chris Pratt) discovers the identity of his father: a celestial that has lived for ages called Ego (Kurt Russel), an appropriate name considering his high-strung personality. After saving the guardians from an attack by the Sovereign, a gold-plated alien species that would make Ebenezer Scrooge drool in his seat, Ego reveals himself to Peter and invites him to his planet so that they could bond as father and son. Joined by Gamora (Zoe Saldana), Drax (Dave Bautista), Rocket (Bradley Cooper), Groot (Vin Diesel) and newcomers Yondu (Michael Rooker), Nebula (Karen Gillan) and Mantis (Pom Klementieff), the Guardians of the Galaxy set out to discover Peter’s true heritage and to see where his destiny may lie.

When Vol. 2 opens up on its first scene, I was immediately reminded of the fun, unorthodox energy sprouted from the first film. Pratt’s charismatic swagger, the catchy and toe-tapping 70’s music, the obnoxious and absurd action, even a miniature Groot was dancing to the tune of “Mr. Blue Sky” while the rest of the Guardians were busy fighting a giant space monster in the background. If this first scene was anything to go by, it was that Gunn still had his sense of style intact and he was ready to follow through with it to the end of Vol. 2.

He does in a way, but it isn’t without its inconsistencies. There is a lot to like here in Vol. 2, mostly having to do with the cast. Pratt and Cooper remain to be the best performers out of the other Guardians, and their spontaneous and quick-witted lines made me laugh and chuckle at their on-screen antics. Kurt Russel has a charismatic intensity that vibes very well with Pratt, and at comparing the two side-by-side, it’s easy to see how their characters are related. Gillan also gets more screen time as Nebula, and Gunn fleshes her out as a more well-rounded character complete with her own fears, apprehension, and regrets. Gunn has previously stated that Nebula is a strong enough character to warrant her own movie. After watching Vol. 2, I can totally see that happening and would be curious to see where exactly Gunn could take her.

These performances alongside the others make for a very strong ensemble, the likes of which hasn’t been seen since last year’s Captain America: Civil War. Yet the characters and their motivations struggle to mesh and at times lack sense altogether. Yondu, for instance, is painted here as an almost-fatherly figure to Peter, juxtaposed right alongside Ego in their differences for how they raised Peter. Yet in the first Guardians, Yondu is the complete antithesis of Peter, a ruthless criminal that was fully intent on killing Quill for betraying his ravagers. How does it make sense that Yondu was dead-set on killing Peter in the first movie, whereas here he’s flipped to being more protective and even concerned? One could argue it as a change of heart, but that doesn’t make any sense. Where did that change come from? What was the inciting incident? Why now after Peter betrayed Yondu not once, but twice?

There are other things that don’t work as well in the picture. The Sovereign are not very interesting villains and serve little purpose except to look shiny on the big screen. There’s a running gag with Rocket where he keeps winking out of the wrong eye while speaking sarcastically. I’m left wondering how a cybernetically enhanced raccoon could not know the difference between his left and right eye. And some of the dialogue was just too stupid to forgive. In the climax of the film, Peter yells to the movie’s villain “YOU SHOULDN’T HAVE KILLED __ AND CRUSHED MY WALKMAN!” I’m thinking the person or the Walkman, pick one and stick with it.

Overall, Guardians Vol. 2 is a decent addition to the Marvel universe, but not an outstanding one. It’s just sort of there to hold us by until we can get to Spider-Man: Homecoming later in the summer. Yet I remain sympathetic towards Gunn because he was betting against expectation for this installment. Nobody was expecting Vol. 1 to be as great as it was: it just came out of nowhere and subverted the entire superhero genre in a fun and stylish way. Following up from the surprise that was, how can you fairly expect Vol. 2 to have the same impact? You can tell Gunn invested a lot of heart and humor into this story: he just invested it in some of the wrong areas. What can I say? Even the classics can let us down sometimes.