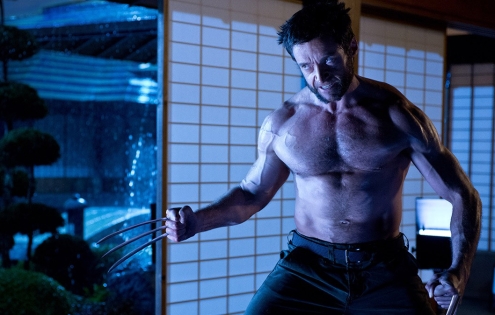 If there’s one good thing about sequels, it’s that it gives studios a chance to redeem themselves if they failed the first time around. With that in mind, I’m thankful that 20th Century Fox has redeemed themselves from X-Men Origins: Wolverine with its sequel The Wolverine, a vicious and riveting action-fest that features perhaps the most impressive performance from Hugh Jackman to date. Is it very original? No, but it’s loads of fun, and that’s one thing this film has over its predecessor.

A follow-up to both the X-Men trilogy and its failed prequel, The Wolverine features an older, more weary Logan (Hugh Jackman), who’s tired of all of the years of fighting and struggling as an X-Man. Now rescinded in the Canadian woods, he’s tracked down by a female samurai named Yukio (Rila Fukushima) who delivers some downtrodden news to Logan: Yashida is dying.

You see, back in WWII, Logan was held prisoner by a Japanese camp close to Nagasaki. After the notable atomic bombing, Logan pulled down a young soldier into his ditch and protected him from the blast. That soldier was Yashida (Haruhiko Yamanouchi), and he’s now succumbing to cancer.

So Logan is brought to Japan, where he once again meets with Yashida to say his goodbyes. But upon seeing him, Yashida instead makes him a ludicrous offer: surrender his healing factor to him, and become mortal. Settle down. Live a normal life, just like Logan has always wanted.

Logan ends up refusing and Yashida dies later that night. But the next few days, Logan notices something strange. After a few skirmishes with the local Yakuza, Logan notices that he’s not healing like he used to. When he gets shot, he’s blown back. When he gets stabbed, he bleeds. And when his claws come out of his hands, they leave holes where they used to be. Now left as an ordinary homosapien, Logan needs to traverse through Japan to discover what happened to his powers and once again become the Wolverine.

I’m going to get the obvious out of the way first: yes, Hugh is as great as Wolverine as he always is. That in itself isn’t a surprise to anyone. This is his sixth time portraying the character, the second time in his own film. He knows what he’s doing. Wolverine has always been the ultimate anti-hero of superheroes. He is a mean, ferocious, aggressive, untrusting, violent lone wolf who hacks, slashes, and cuts his enemies to pieces. He is not supposed to be a likeable fellow. Were it not for his slight sense of empathy, he could very easily be a villain if he wanted to be, and that’s what makes the character so fascinating. He exists on both sides of the superhero spectrum, and Jackman has always done well in contrasting the two sides of the character.

But an outstanding actor can still exist inside a mediocre movie. As demonstrated in the previous X-Men Origins: Wolverine, a performance by itself is worthless unless a good director can guide it in the right direction. Luckily, James Mangold does exactly that. Previously helming films such as Walk the Line and 3:10 To Yuma, Mangold combines action with relevance in The Wolverine, making it not only an exciting superhero blockbuster, but also an introspective character study on a man fighting his own immortality.

First, the action. While I still believe that X2 sports the best action scenes in the franchise to date, The Wolverine is definitely a worthy runner-up and is incredibly creative in constructing its action. In one of my favorite scenes, Wolverine is fighting against a slew of Yakuza on top of a bullet train with a base speed of 200 mph. If that just sounds ridiculous, imagine what it looks like seeing these guys fighting each other on top of it. While Wolverine and the Yakuza are desperately stabbing into the hull to maintain their grip on the train, they keep slashing at and fighting each other, all while the wind is slamming against their faces and they’re dodging signs and advertisements speeding past them. In another scene, Wolverine is fighting a samurai inside of a dojo, and the editing was so well interwoven together that I felt like I was watching a swordfight not unlike Gladiator or The Last Samurai. The Wolverine is an excellent blending of genres, and seeing Wolvie fighting in this new feudal environment gives a unique spin on the character’s regular hack-and-slash action.

But it’s not just the action that’s so enthralling. For the first time in any X-Men movie, Wolverine’s immortality is brought into question as a personal conflict for the character. It’s funny how I’ve never considered Wolverine’s healing factor as a weakness for him. But thanks to how cleverly constructed this movie is, it does bring up a valid question: if it were possible, would you want to live forever? I know I wouldn’t. What sane person would want to stomach Justin Bieber for the rest of their lives?

Wolverine, however, has much more serious consequences to face for his immortality. At this point in his life, he’s a weathered soul. He’s killed people. Watched as his friends were killed. Fell in love. Lost love. Found a family. Lost a family. For someone who has lived and lost as much as Logan has, I don’t blame him one bit for being tempted by the peace of mortality. As Yashida points out, if he gave up his powers, he could grow old, settle down, have a family, and die happily in peace, just like any other normal man. After everything he’s been through, “normal” is a gift Logan deserves at the very least. Yet, the gift evades him.

I enjoyed The Wolverine very much. The action, the conflicts, the performances, they all get back to the roots of the character and why they make Wolverine so interesting. A few of the film’s villains might be flat and uninteresting, and while the plot is unique with its themes, its execution fails to impress as much as its predecessors do. That still doesn’t change the fact that this is a fun action movie, a meaningful display of Jackman’s talents, and a worthy redemption from the haphazard failure of X-Men Origins: Wolverine. It’s good to have you back, Logan. Snikt, snikt.