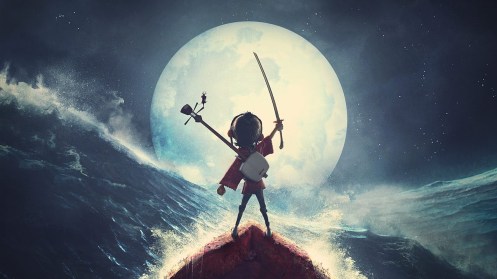 The kid’s a great musician AND origami artist.

Kubo and the Two Strings is not only better than most of today’s animated movies: it’s also better than most of its live-action ones. That’s because it fully believes in its vision and purpose, giving genuine, real life to these characters that we perceive as fictional and adding weight to the adventures that they go through. Kubo and the Two Strings fully believes that everything going on in this movie is real, even though none of it is real.

Or is it? When you were told stories as a child, were your first instincts to question how true any of it was? Did you ask if Arthur really did pull the sword out of the stone, if David truly beat the Goliath, or if Jack really did climb up a beanstalk? Of course you didn’t, because you didn’t need to ask. We already believed that they were real. Any validation beyond that would have taken away from our enjoyment of the amazing stories we were told.

Kubo and the Two Strings is yet another amazing story to tell, a movie about a boy named Kubo (Art Parkinson) who is on the run, protecting his mother from the clutches of his evil grandfather, the Moon King (Ralph Fiennes). Kubo has two friends accompanying him on this journey: Monkey (Charlize Theron) and Beetle (Matthew McConaughey), who is the most dysfunctional pair of animals that have ever gone on any journey. Monkey is the type A protective companion who will stop at nothing to make sure Kubo is safe. Beetle is more laid back, relaxed, and is more prone to dreaming rather than fighting. Together, these three embark on an adventure to defeat the Moon King and free Kubo from his clutches forever.

Right off of the bat, I need to praise the visual style of this project. Filmed using stop-motion animation, Kubo and the Two Strings feels and breathes like ancient Japanese mythology, its characters talking, fighting, flipping, and moving like the origami figures Kubo loves to craft in his spare time. The fourth film to be produced by animation studio Laika, Kubo mimics the claymation style of its predecessors, including Coraline, Paranorman, and The Boxtrolls, and it stands strong alongside them.

Yet, Kubo stands out even among these films, not only being a stellar and entertaining animated film, but also an exciting and thrilling action film as well. In one sequence, Monkey is fighting one of the Moon King’s underlings on a boat made out of autumn leaves during a violent sea storm. The choreography in this fight looked incredible, with Monkey flipping around using all four of her limbs, her enemy swiping at her with her hand blades, their swords colliding and sparking during the loud crashing of waves and lightning.

I want to assert that this sequence, like every other frame of this film, was animated. Yet, it featured action on-par with most of today’s live-action films. More than the highway sequence in Deadpool, more than the titular fight in Batman V. Superman: Dawn of Justice, the action in this sequence impressed me. It impressed me with its fast-paced energy and lightning-quick reflexes of its characters. It impressed me with its use of environment and how they bounced and deflected attacks off of each other into the sail and deck. Even though this sequence was animated, it impressed me how exciting and thrilling it was compared to most of this year’s summer blockbusters.

The rest of the film does not let up on the action or the excitement. Besides it’s incredible display of visual and technical prowess, the film also has an incredible story to get wrapped up into. With a story by “Foster’s Home For Imaginary Friends” animator Shannon Tindle and a screenplay by Paranorman scribe Chris Butler and Marc Haimes, Kubo and the Two Strings is confident in its lore and mythology, so much so that not only are spin-offs and sequels encouraged: I think it’s even necessary. This is a deep, complex narrative on display, and the movie demonstrates a strong understanding of its characters and how they affect each other. I wouldn’t be surprised if we saw a sequel to Kubo and the Two Strings in the near future, and I would welcome it with excitement and anticipation.

There is one plot twist in the movie that doesn’t fit with the overall plot and creates more problems rather than solves them. Besides that, this is a flawless movie. Like Akira and Spirited Away, this is a movie that challenges animated movies and what they can accomplish. And at the heart of it all is a brave young boy, trying to live his life without the things that he needed most.