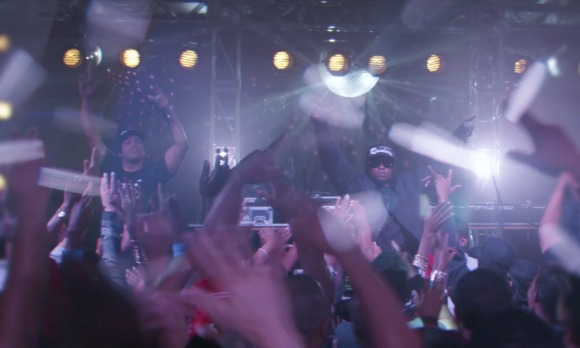 The biography of the boyz in the hood.

That’s a motto my newsroom lives and dies by. That’s also a truth that the boys from Straight Outta Compton live and die by. The only difference between us is that we experience it figuratively: they experience it literally.

We witness this early in Straight Outta Compton; as early as the first scene, in fact. Eric Wright, a.k.a. Eazy E (Jason Mitchell) confronts his cousins, who hasn’t paid him yet for the dope that he sold them a few weeks ago. Suddenly, like an Earthquake striking a town, the police ram into the house and start raiding it, arresting any African-American they can find in there. E slips out of the window and onto the roof just in time. He’s survived. For now.

We switch to a less tense scene. Andre Young, a.k.a. Dr. Dre (Corey Hawkins) is sitting on his bedroom floor, listening to classic funk and R&B records on his record player. Dre isn’t like the others in the streets. He doesn’t want to sling dope or be in a gang. He just wants to produce beats and music: a mozart to his suburbs.

His mother Verna (Lisa Renee Pitts), however, isn’t so enthused about his career path. He has a family and a daughter to care for, and he isn’t going to do it sitting on the floor listening to a record player, DJ’ing for a club at night. Dre, however, has his mind set. His future doesn’t lie in cleaning toilets and taking fast food orders. It lies in a DJ mixer and a pair of headphones. Dre knows what he needs to do.

Meanwhile, on the other side of Compton, O’Shea Jackson, a.k.a. Ice Cube (played by his own son, O’Shea Jackson Jr.) is sitting on a bus waiting to go to school. He sees the white kids in another school yard, all dressed in nice clothes, all with newly-bought school supplies and slick cars. Meanwhile, Cube sits in his creaky bus seat, looking at his clothes he probably wore yesterday, and his worn pencil and notepad, which is the only school supplies he has.

He takes his pencil and notepad and starts writing.

These three men, alongside Lorenzo Patterson, a.k.a. MC Ren (Aldis Hodge) and Antoine Carraby, a.k.a. DJ Yella (Neil Brown Jr.) make up the notorious hip-hop group N.W.A. The last two words stand for “With Attitude.” You can imagine what the letter “N” stands for.

Here is a film that, by any standards, is morally despicable. I go on and on in some of my reviews how movies are either incredibly violent, shamelessly sexual, or blatantly vulgar. This movie is all of those things and more. F-words fly out of their mouths like bullets in an uzi. Nude and scantily-clad women flock to these rappers in herds. In some scenes, they engage in sexual intercourse with many attendants watching, all with drugs and alcohol present. Police and gang violence is also present in the film, with crips, bloods, and officers shoving, punching, shooting, assaulting, and harassing each other in very violent, confrontational fashions.

Do not be fooled. This is not an easy film to watch, and if you don’t have a strong moral compass, you will get lost in the violent, sexual, promiscuous, profane, and blatantly explicit content you will find in this motion picture. If you hate hip-hop, you will hate Straight Outta Compton.

That being said, Straight Outta Compton is one of the most compelling films I’ve seen so far this year. The movie is more than the problems it poses. In fact, I’m happy that the film shows the content that it does in the film. It shows the destructive lifestyle these people experience, both on and off the streets, and they confront very real issues that hits them hard at home and at heart. The most significant issue that the movie covers is, of course, police violence. In one of my favorite scenes from the film, one of the police officers that was harassing these young men was not white, but black. My jaw dropped as he continued to berate these men as they were walking away: “Listen to your master!” he said, referring to their white manager.

What I love most about this movie, though, is that it isn’t biased. It isn’t pro-police or anti-police or pro-gangs or anti-gangs. It shows the ugliness of every side of Compton, whether it exists on a badge or on a bandana. Police cruelty is an obvious focus of the film, because it’s a recurring theme in hip-hop and rap culture. I was pleasantly surprised, though, to find at how much the film delved into hood culture and how damaging it is to these young men’s lives. The biggest instances of cruelty came from record producer Suge Knight, portrayed here by R. Marcus Taylor, whose business tactics include physical intimidation, humiliation, fear, confrontation, and violence. If the movie is anything to go by on how the real events transpired, Suge is a monster. He is painted as nothing less than the Godfather of suffering in this movie.

The parallels this movie draws on is ingenious, and director F. Gary Gray is exemplary in realizing the African-American struggle in a poverty-stricken neighborhood and in their aspiration to escape from it. Jackson does very well in portraying his father, and demonstrates the same snarl and attitude with such accuracy that it made me laugh at how similar he looked to his father. Hawkins is passionate and driven in portraying Dre, and while he physically looks smaller than the real-life Dr. Dre, his performance and his versatility in emotion more than makes up for lacking in physical similarities.

The greatest performance, however, comes from Jason Mitchell. In hindsight, he is the character with the most problems. He’s egotistical, he objectifies women, he betrays his friends, he resorts to violence, and he flourishes in the most destructive lifestyle as he bathes himself in a plethora of drugs, alcohol, and sex. In comparison to his N.W.A. companions, he is the most flawed character. But with his flaws comes his emotions to those flaws, his own moments of self-reflection that makes him think back at his decisions, his career, and the life that he’s trapped in. E goes through many emotions in this film, from fear, to anger, to happiness, to sadness, to heartbreak, and Mitchell portrays all of those emotions perfectly. If he doesn’t deserve the Academy Award for best supporting actor, he definitely deserves a nomination.