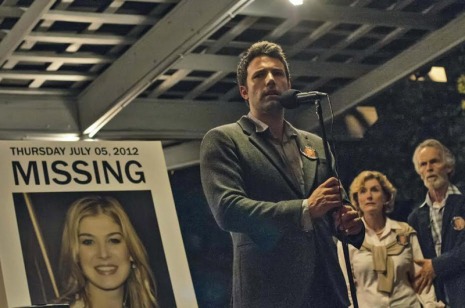 What happened to Amy Dunne?

Gone Girl is a very strong psychological thriller, packaging the essential elements of tension, grit, and confusion to make an extremely fascinating, yet equally frustrating, watch. Imagine you’re driving on a highway, except you take a wrong turn. Then you take another wrong turn. Then you take another, then another, and then another after that. Gone Girl is that highway, taking you through so many twists and turns that you don’t know which way you’re going anymore. The only problem is that there’s no end destination when you get off of the highway.

Based on the book of the same name by Gillian Flynn, Gone Girl starts with Nick Dunne (Ben Affleck) coming home to see his living room torn apart and his wife Amy (Rosamund Pike) missing. There are a few details that disturb him upon this discovery. The glass table is smashed in. Chairs are overturned. A blood splatter can be spotted above the stove in the kitchen. Suddenly, Nick finds himself swept into a media frenzy as everyone everywhere cries out “Where’s Amy?” as he and Amy’s parents work to find Amy and bring her back home.

Yet, in the midst of all of this media attention, people start to recognize strange things about Nick. He’s behaving oddly for someone who has just lost his wife. A woman outside of a press conference takes a selfie with him and posts it online. He smiles at the conference when people take his picture. And as police discover Amy’s diary and uncover incriminating evidence about Nick’s marriage with Amy, people start to ask one question: did Nick Dunne kill his wife?

Let me start by saying this: there’s no way to expect anything from this film. The minute you think Gone Girl is going in a specific direction, it does a reversal and goes in the complete opposite direction, setting you on another prediction track until it does another reversal. There are many factors contributing to these twists, the biggest one being the writing contributions of Gillian Flynn. Flynn, who wrote the original book, was adamant about being involved in writing the screenplay for David Fincher’s adaptation, and she’s a good sport as far as working with him. Even though there are a few differences conceptually from the book, the work remains a whole emotionally, and lets off this gnawing paranoia on both characters as we question who is the victim and who is the perpetrator. This movie is like a game of cat and mouse, except no one really knows who is the cat or mouse.

The writing is ingenious, but the real star of this show is David Fincher. Fincher, who is no stranger to mind-bending plots (1997’s The Game, 1999’s Fight Club, and 2007’s Zodiac), incorporates elements from all of his movies into this one mind-bending thriller. It has plot twists as big as those in The Game, the pseudo/suicidal/mind trickery in Fight Club, the dark, disturbing realism in Zodiac, and the broad, expressive shots, angles, and edits from The Social Network. I like this about Fincher films, that they’re so distinct in visual style that you can almost instantly tell that it’s a David Fincher film.

Example: In the opening sequence of The Social Network, we capture the essence of the scenery as a lonely Mark Zuckerberg trots back to his dorm. We get a sense of the campus he’s on, the bridges, the buildings, the sidewalks, the trees. We not only feel the physical surroundings around him, but also the life that’s in it, almost like the scenery is breathing around him. Fincher did the same thing during The Girl With The Dragon Tattoo, and he did it again with Gone Girl. When he’s not filming a scene where there’s a tense exchange of dialogue between characters, he’s quietly viewing the scenery all around him, telling a story with silent images just as much as he does with outspoken characters.

More than what he does shot-wise though, I’m impressed with how he handles his cast. Look at the names associated with this film. Ben Affleck. Rosamund Pike. Tyler Perry. Neil Patrick Harris. Are any of these names what you’d expect to see in an intricate crime-thriller, let alone give a decent performance? I mean, the last memorable role Perry had since dressing up in drag as Madea is Alex Cross, and that was about as complacent as an action movie can get. Neil Patrick Harris’ most serious movie role is as himself in Harold and Kumar. Rosamund Pike is most known as a Bond girl. Affleck’s acting career is self-explanatory. I looked at all of these actors cast in these roles, and I couldn’t help but wonder what they were doing in a Fincher film.

Then I saw what he did with them, and I couldn’t see anyone else in their roles. Perry played Dunne’s attorney Tanner Bolt, and he was so smug and straightforward that he could lend Robert Downey Jr. a few tips for The Judge. Harris steps so wonderfully into a role he’s never played before, and Pike is exemplary too, though I won’t exactly specify how. Affleck to me was the most interesting. He uses awkward lulls, blank expressions, and his sterile voice just like he did during some of his bad performances in past movies. It’s not a bad performance though. Fincher is just using Affleck’s natural reactions to lend details to Nick Dunne’s character, like how he could be smiling in pictures while his wife is missing, or why he sounds so unconvincing when he gives a speech about how he loves his wife to ongoing listeners. Fincher uses both Affleck’s strengths and weaknesses as an actor to the film’s advantage, and that goes the same for everyone else in the film.

I liked many things from this film. The cinematography, the editing, the thought-provoking plot, Fincher’s masterful direction of the film and it’s cast all culminated into a jaw-dropping experience. My only regret about this film is it’s ending. I won’t spoil it for you, but I will say that it ends in the same way that it begins, posing questions and vague thoughts so that the audience may fill it with their wild imaginations. I realize Fincher and Flynn did not intend to have a straightforward, clear-cut ending, but I have a stubborn need for closure. Films are supposed to provide answers to the questions they’ve already posed to you. Gone Girl does not provide an answer. It provides a question.