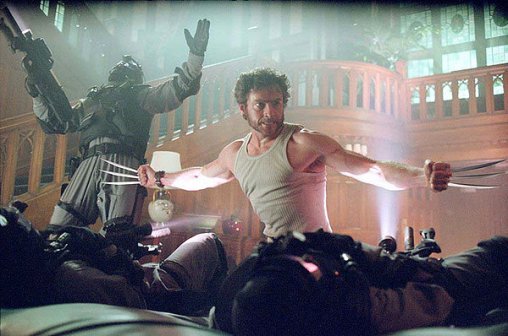 A social commentary disguised as an action blockbuster.

X2 is science-fiction brilliance, a sequel that is relentlessly exciting, smartly written, intelligently designed, and jam-packed with so many involving action scenes and stunning visual effects that it could potentially work as a stand-alone movie, rather than a direct sequel to its predecessor X-men. Like Lord of the Rings and Harry Potter, this movie serves as an expansion for the universe that it is in and as an opportunity to provide fan service to its dedicated readers and lovers of the iconic source material. I’m not very much for sequels, and I definitely don’t want this to become a superhero monopoly, but if we have to have sequels packaged with every superhero installment in the near future, more filmmakers should pull inspiration from X2.

X2 picks up just short of a few months after X-men originally left off. After the combined efforts of the X-men defeated Erik Lenshurr, a.k.a. “Magneto” (Ian McKellan), and imprisoned him within a special plastic cell (Countering his ability to manipulate metal), the X-men go about their (ab)normal lives as teachers at Xavier’s School for Gifted Youngsters, educating mutants on how to control their powers and not be afraid of who they are. Only Logan, a.k.a. Wolverine (Hugh Jackman) sets out to Canada to seek out answers for his long-forgotten past, and even then he comes up empty: the lab where he was supposedly experimented on has long since been abandoned.

Soon, however, a new figure from everyone’s past re-emerges: William Stryker (Brian Cox), a government official who has experimented on mutants for as long as mutants existed. After pitching his program to the President and revealing that Xavier’s School For Gifted Youngsters is a front to the X-men operation, the X-men and the Brotherhood of Mutants must band together to save each other from Stryker’s plot, and quite potentially the rest of mutant kind with them as well.

Directed and co-written by Bryan Singer, who also directed X2’s predecessor X-men, X2 is a highly involving, irreverently fascinating superhero epic. Functioning just as much as a political thriller as it does a superhero action flick, Singer is careful to deliberate and balance everything effectively in the movie, from its themes of xenophobia and racism to its highly-exciting action sequences where mutants go flying, flipping, and teleporting in every which way and under.

Funny, the first time Singer tried X-men, balance was a problem for him. He put a greater emphasis on the action and the visuals of the mutant’s powers more than what they meant for them individually, quite possibly because that’s more of what the audience wants to see anyway. Here, balance is not an issue. He does a great job at both not only giving us a healthy dose of action-packed sequences of grandeur and excitement: he also does a great job giving us heartfelt, genuine emotion, showing these character’s internal reactions just as much as their external.

Example: After escaping from an attack on themselves and the rest of the X-men earlier in the movie, Wolverine takes himself and a small group of mutants to Bobby “Iceman” Drake’s (Shawn Ashmore) home, where he’s forced to essentially come out to his family that he is, in fact, a mutant. After seeing the emotion and disparity of his family reeling in with the shocking revelation of Bobby’s abilities, the police pull up to the house, and an explosive battle results between these X-men and the officers.

See, this is what I’m talking about: there isn’t a single moment in the movie where the action outweighs the drama, or the drama outweighs the action. For every scene where something emotionally weighty or significant is revealed, there is another scene where something exciting or thrilling happens that jump-starts your interest all over again. Whether it’s a scene involving dialogue between characters, a narrator giving exposition on a conniving plot, or another scene where some sort of grand, explosive battle takes place doesn’t matter. It’s always moving, it’s always doing something different, it always keeps up its interest and it is never boring.

I’m very happy with this movie. In a world where so many sequels make the mistake of replacing genuine emotion with an overdose of action and visual effects, X2 is a clear standout. While not necessarily perfect, and still incapable of escaping from some of the cheesy, ham-fisted moments that I rued in the first movie, it definitely stepped up its game as a far as drama goes, and has deeper contexts to offer regarding the xenophobia/racism issue that inspired the series as a whole since its comic book creation. In that sense, X2 is more than a superhero blockbuster. It’s a social commentary on judging another person for who they are and the destructive consequences that can come from it as a result.