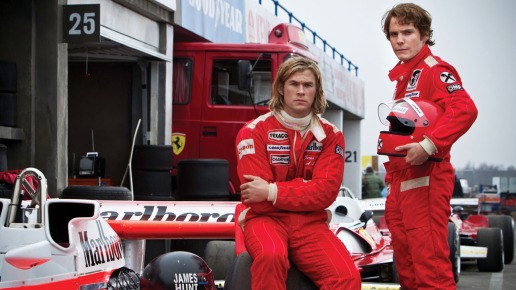 I couldn’t have thought of a better title for the movie Rush, because that’s exactly what it is: an unstoppable and uncontrollable rush of energy, excitement, and gravitas, a movie that starts on a high note and simply refuses to let up all the way through.  I hear a lot of complaints that there are biographical movies that are more concerned with cashing in on people’s legacies rather than making an authentic account of a person’s true story, such as Jobs or The Iron Lady.  Here is a break from all of that, a refreshing and ideal account of two racers who live every moment of their life trying to figure out how to beat the other guy, while understanding that their symbiotic relationship is what made them both great racers in the first place.

Focusing on the 1976 Formula One Grand Prix season, Rush follows the story of two different racers, both with polar opposite personalities and complexions.  James Hunt (Chris Hemsworth) is a hard-headed racer who races with passion instead of brains, and a playboy who drinks a lot, smokes a lot, and sleeps with beautiful women, a lot.  Nicki Lauda (Daniel Bruhl) is a intelligent, smart, and crafty german who is just as focused and analytical as he is rude and ignorant. The film chronicles the contempt they feel for each other and the mutual respect that makes them strive to be better than the other man.

Before you go and see this picture, I encourage you to go online and google the names “James Hunt” and “Nicki Lauda” and look at their images.  Got it?  Okay, now that you’ve done that, go and watch the movie.

If you actually took the time to open up another tab and look at the images, you will be just as shocked as I was.  Comparing the sight of Lauda and Hunt with that of Bruhl and Hemsworth isn’t comparing them at all: they look exactly like the same characters, from the red jackets around their back to the color and hairstyles that we see on their heads.

I love it when movies do this: when movies are so accurate to the real-life figures that they copy their appearance so accurately, it is nearly impossible to differentiate from them.  We’ve seen this from The Fighter in 2009, and recently from Daniel Day-Lewis in Lincoln.

Here is yet another example of a movie that is compelled by truth and driven by accuracy, pun intended.  Rush is exhilarating.  Exciting.  Edgy.  Anticipative.  Emotional.  True.  Everything about this movie is a heart-pounding, sweat-pouring adventure, and what’s truly impressive is not that the movie makes us feel this way: its the fact that it really happened, and that really director Ron Howard is just documenting it rather than retelling it.

One of the highlights in the film are easily its lead actors.  Not only do Hemsworth and Bruhl look exactly like the people they are portraying: they act like them too, with their rivalry and their edginess apparent in every fraction of a scene.  Sometimes their clashes are funny, like the dialogue bits between Mark Zuckerberg and Eduardo Saverin in The Social Network, while at other times its strikingly serious like the James Braddock/Max Baer rivalry in Cinderella Man.  Whatever the situations, these actors do well at remaining in tense situations and they never, ever break their character.  Hemsworth is energetic, lively, and egotistical as Hunt, a man whose only loves are beautiful women and racing.  Bruhl is equally as egotistical, but he’s got a sly smartness about him you can’t help but appreciate.  There’s one great scene where Hunt calls Lauda a rat and he responds by saying “You think I’m hurt that you call me a rat, Hunt?  Rats are ugly, but they are smart.  Intelligent.  I am proud of that.”

The film doesn’t slow down at their performances, however, and filmmaker Ron Howard (Apollo 13, A Beautiful Mind) and screenwriter Peter Morgan (The Queen, Frost/Nixon) are quick to follow up on the pace of these two fine actors.  The guys who made Fast And Furious could take a hint or two from this movie. Morgan and Howard not only succeed in making the movie exciting and suspenseful through key moments in races, press conferences and private, vulnerable moments when these racers are all by their lonesomes: they’ve managed to make it gripping and relevant, a grounded drama thats equal parts and insightful into these two men’s lives that we feel like we’re witnessing their story upfront in the pit, not viewing it from far away on the sidelines.

Oh, I could go on all day praising this film and how all the elements culminate into a near masterpiece.  The soundtrack by Hans Zimmer is tense, unsettling, and noble, defining these men’s relationship just as well as the movie does.  The editing is tight, crisp, and clean at the hands of collaborators Daniel Hanley and Mike Hill.  For Pete’s sake, even the cinematography by Anthony Mantle was so good at capturing emotions and details so intimate, Howard would probably have missed some of them if Mantle wasn’t there to point them out.

Bottom line: Rush is entirely, unforgettably awesome.  It’s a strong and powerful tale about two passionate racers who knew what they were after and were willing to sacrifice whatever they could to go after it.  We see why they want to beat each other.  We understand who they are and why they are racing.  We know what makes them tick and we want to see them make it through every pulsating moment of the film in order to accomplish their dreams.  Trust me, you’re going to want to sit in on this race.  Oh, and bring your seatbelt.  You’re going to need it.