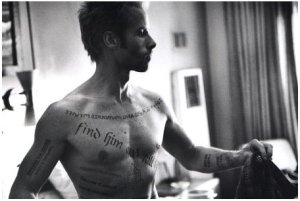 Like solving a puzzle backwards and then back together.

I’ve never been so attentive to a plot in a way that I was with Christopher Nolan’s Memento.  I’ve never been so immersed, so mesmerized, so hypnotized by the plot, by the narrative, by the structure, and by the character himself and everything he has to struggle with.  When I asked a friend of mine what it was like watching Memento, he said to me “It’s like reading a book, except chapter one is the epilogue, the epilogue is chapter two, and chapter one is sprawled out throughout the book until it reaches the end of the book, which in reality, is the beginning.”

I know, I know, it sounds confusing.  But believe me, the structure of storytelling in this film only adds to the fascination that I feel for the main character.  The film begins with a photograph, a small photo showing a dead body lying on the ground with his brains blown out.  The man holding it shakes it a couple of times, but after a couple of seconds the celluloid fades to white, as if it just came out of the camera stock.

Blood shifts along the ground.  Glass forms back together.  A bullet floats off of the ground and enters itself back into the chamber of a gun.  As the man fires it and cocks it, the corpse he shot on the ground lifts his head, blood flows from the ground back into his head, and his glasses form back together just in time for him to shout “NO!” at the man in front of him before he points the gun at him.

If you’re confused at this, don’t be.  This sequence is shown in reverse, inverted from the normal time stream of what would normally be happening in this situation.  Even though the scene plays backwards, we understand the basic points of it: a man shoots someone and takes a picture of his dead body.

Consider this an outline for the rest of the film.  Leonard Shelby (Guy Pearce) is a man who struggles with short-term memory loss.  He suffers from this condition after sustaining a severe injury from an unknown assailant who stormed inside his house, slammed his head against the mirror, raped his wife, and then killed her while he was passed out.

Fast forward to the present as Leonard suffers from his current condition.  He remembers who he was, where he came from, and how he got to the place he’s now at, but due to his condition he is incapable of making new memories.  Depite this, he’s now on a quest to find the man who killed his wife and stole his memory by leaving himself notes, taking photographs, and marking tattoos on his body to serve as his reminders that his irreversible memory condition won’t allow him to remember.

Written and directed by Christopher Nolan, the same guy who made the 1998 neo-noir film Following, Memento is the sort of movie that can define a career.  This is a plot as heavy, thick, and deceptive as they come, a clever and concise thriller that is exciting and interesting in every pulse-pounding moment of the film.  Much of this has to do with the film’s structure, and Nolan’s expert timing with the film’s plot.

Take, for instance, his decision to structure the story in reverse order.  Many would look at this and think that this would lead to a confusing, convoluted story.  I think that’s the opposite of what we see here.  Imagine it like you’re watching a police detective working at the scene of a crime: he always starts at the end, but if he follows the right path, he’ll always end up where the story began.  That’s exactly how Memento plays out, and the payoff at the end (beginning?) couldn’t have been greater when all is revealed by the film’s conclusion.

Another thing that makes this film stand out is Guy Pearce.  Here he portrays a disturbed man, a man haunted by his past and by his situation so much that it taints his mind like it does the blood on his jacket.  I heard from a friend that the role was originally intended to be portrayed by an A-lister like Brad Pitt or Aaron Eckhart, but Nolan eventually opted for a lesser-known actor that would bring as much energy and enthusiasm to the role.  His decision was a smart one.  Guy Pearce is perfect as Leonard, capturing the right amount of turmoil and paranoia that comes with people taunted by mental disorders while at the same time retaining the emotion that shows that he is a confused, misunderstood man.

But again, his struggle only leads back to the films structure.  And no matter how Nolan formats his story, I’m surprised at how much it holds up despite the unstable nature of the film’s narrative.

If you think you found one, I bet you $150 that someone can find an opposing argument, and $200 that you’ll end up being wrong.

I keep twisting this film inside and out.  I keep going back to it, looking through it, rewatching it, trying to pick it apart and find any possible flaw I can point out with this movie.  I cannot.  Every single frame of every single second in Memento is tense, fascinating, and mesmerizing, capturing both your attention and your mind early in the film and refusing to let go until the very last slide of the end credits roll.  It’s one of those movies you watch that as soon as you’re done watching it, you go back to the theater just so you can experience it again.